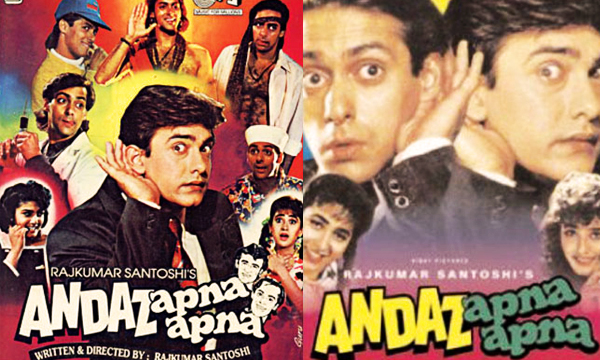 UPDATE: A day after the news to the sequel was revealed, the Sultan actor Salman Khan and the PK actor Amir Khan expressed their interest in being casted as Amar and Prem in the reboot. The duo’s friendship dates back to the good old 90’s days where they shared screen space in Andaz Apna Apna for the first time.

Amir revealed his excitement during the media interation of Dangal “Really? Wapas Ban Rahi Hai? Oh Acha sequel… I would love to do Andaz Apna Apna 2 with Salman again.” “Script Achi Ho Toh Kyun Nahi Karenge? But If you ask me who to cast then I will to hear the script,” Pinkvilla quoted Amir as saying.

We all remember the mega hit Bollywood comedy movie Andaz Apna Apna  that still gives us jolts of laughter; featuring the popular duo Amir Khan and Salman Khan, the movie managed to reap some loyal fans. After more than two decades, a sequal for the classic hit movie has been announced and the fans are not happy with the news.

Why? You ask. Simply because we would not be able to witness the same hilarious lead cast once again. Will this movie even come close to the original version of AAA? Fans don’t really think so!

Just when the news broke, people took to twitter expressing their views and opinions about the Andaz Apna Apna reboot. Have a look at some of the tweets that show what people really feel about the sequel.

I feel its just wise to not mess with classics.@FuhSePhantom its definitely not a great idea to remake #AndazApnaApna
Junta Maaf nhi karegi

I'd love to see an #AndazApnaApna sequel with the same cast but I don't know how to feel about this… https://t.co/oPQiuKAvrE

Nooooooooooo. Don't ruin one of my favourite films 😢😢😢 #andazapnaapna

It is not confirmed who the director of the movie will be. According to sources, the sequel of the classic movie Andaz Apna Apna will be directed by either Vikas Bahl of ultimate hit Queen fame or the Udaan and Lotera director, Vikramaditiya Motwany.

While talking to Mumbai Mirror, the producer of the movie, Preeti Sinha shed some light on the script and said that:

“The script is locked. It has been developed by Vivek Soni and Hardik Mehta who won a National Award this year for his non-feature film on kite flying in Ahmedabad, Amdavad Ma Famous, under the creative supervision of Vikas. It’s a super script and promises loads of fun.”