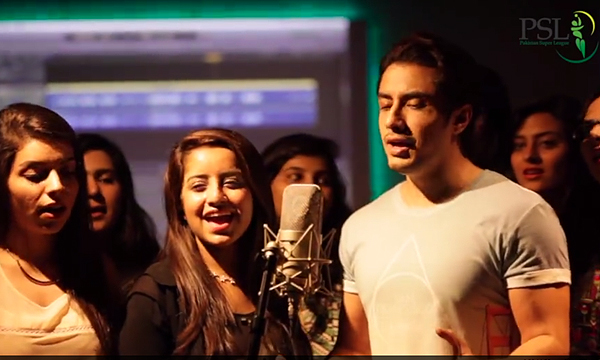 Pakistan Super League 2016 is the next big thing for the entire nation and making this event even more auspicious, Pakistan’s very own rockstar, Ali Zafar has rolled out some sneak peek shots of the official PSL Anthem titled, Khel Ke Dikha. The promo of the song has just been released by Ali on social media.

Ali has not only penned the lyrics of the anthem but has also sung and produced it in his newly established studio. There’s no doubt that whatever the singer has undertaken has turned out to be hugely popular among his loyal fans. This time also, this PSL anthem under him promises to be a super hit.

Check out the complete video below:

Check out the promo below:

Check out the BTS video below:

Ali, who recently delivered three mega hit songs in the Coke Studio Season 8 says, “If I wasn’t a musician or a singer, I would be a cricketer because that’s what I was inspired to do when I was a young kid. It is a big honour for me to do the song for Pakistan’s very own league, PSL.” PSL is was launched at a star-studded event on September 20th, Sunday. The event saw the biggest stars from the worlds of cinema, music, TV and fashion who came together to support this historical event.

Official hashtags for any social media mention of the PSL are #PSL and #AbKhelKeDikha.