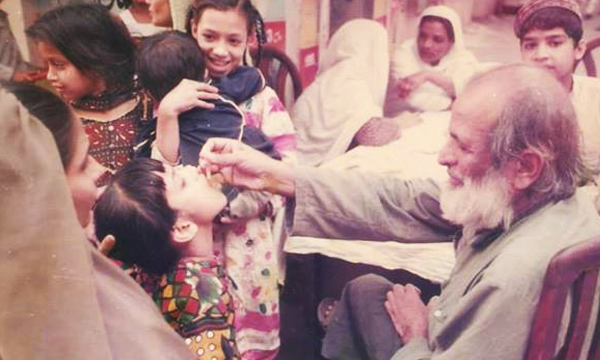 Edhi was the messianic presence for the poor and the needy. His work will remain unprecedented for a very long time; more than sixty years in service of the mankind, Edhi sahib never ceased to serve the underprivileged. He was the beacon of hope and kindness for all, regardless of their religious or ethnic background. He was labelled an angel quite fittingly.

Edhi sahib was born in the Indian Gujrat in 1928. At the tender age of 11, his mother was unable to support their family due to a heart stroke. Hence, he had to take on the role of the bread earner in the family. After his mother passed away a year before, Edhi aged 20 was able to gather funds to establish a small dispensary. Having experienced suffering at a close range in his earlier life, he was set on helping alleviate those of the others.

Later on, he met Bilquis his wife who was a nurse at the time and would help implement his vision in the future. He was working day and night, driving around the city to find someone in need and assist. He would not shy away from begging for alms if it came to that. With his perseverance and non-stop struggle, he managed to create one of the best voluntary ambulance systems in the world.

He took in orphans, unwanted babies, mentally unstable, senior citizens and provided other such services selflessly. He was a simple man who had a bleeding heart for humanity. He did not dabble with politics albeit being approached several times. His work needs to be remembered and carried on.

Edhi had been blessed with a multitude of awards for his humanitarian work and selfless spirit, both locally and internationally. – Silver Jubilee Shield by College of Physicians and Surgeons, Pakistan, (1962–1987)
– The Social Worker of Sub-Continent by Government of Sind, Pakistan, (1989)

– Recognition of meritorious services to oppressed humanity during eighties by Ministry of Health and Social Welfare, Government of Pakistan, (1989)
– Honorary Doctorate degree from the Institute of Business Administration Karachi (2006)