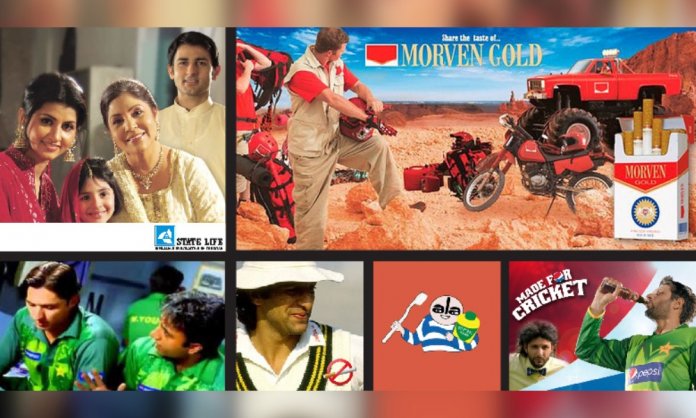 When friends and relatives of the same age group are sitting and chatting, the conversations usually swing to nostalgic encounters of the past, especially the television commercials (TVC’s) we used to watch a couple of decades ago.

Attributes of TVC’s of the Past:

These are the following attributes which we feel we’re part of the TVC’s produced a decade or two ago, but lack in the ones being provided today:

2.  Either a song was used to describe the attributes of the product/service or a piece of background music was used with one word at the end.

3. Everything was simple. Therefore, it had the maximum impact

4. There were no price wars. All brands stood for excellent quality

Here, we will take the readers to yesteryear, when simple yet memorable television commercials (TVC’s) were what added color to our lives.

This was perhaps one of the earliest animated TVC’s shown in Pakistan. It had humor from the start; it didn’t have any conversation or debates on the importance of brushing your teeth.

It only had one message, and that was to brush your teeth twice a day, especially before going to bed. I guess it was animated so that children would follow the habit of brushing their teeth.

Anticipation has always been an indispensable attribute of useful a TVC because anticipation compels the viewers to watch a TVC in the first place. And whenever something is backed by anticipation, then the message does enter the subconscious mind, which helps in brand recall. Again, in this TVC, a rhythmic song was used to narrate why people like to have Naz Pan Masala.

The TVC featured a little girl singing “Aye Khuda Meray Abu Salamat rahen.” As she sang, she narrated what State Life Insurance was and why it should be bought. It was more of an emotional branding, which requires significant effort to do so, as the right message has to reach the target audience effectively.

Here, the girl was influencing the adult viewers to get an insurance policy.

One of the greatest TVC’s ever produced in Pakistan has to be the Morven Gold Rhythm of Unity, which was aired in the 1990s. It was a blend of color, message, appeal, theme, choreography, and excellent execution.

The footages and the music were attractive, and the music was a blend of all the folk music, which is part of Pakistan’s cultural hierarchy. The places where the TVC was shot are also the cultural heritage of Pakistan. With only music and dance, the TVC is still remembered for it was something never done before in Pakistan. And the readers will agree when I say that something of that sort has never been done again.

This TVC, again, had no voice-over just background music and featured Wasim Akram jogging in the park. This was the time when Wasim Akram had taken his ODI hat-trick and had made his position in the Pakistan Cricket Team as an opening bowler. The TVC was more than two minutes long, but even without a song or voice over, the TVC wasn’t boring at all. It was because there was action throughout the TVC.

The two boys were shown talking while sitting on the bench, Wasim Akram was shown jogging and his footages while batting and taking wickets were also demonstrated, which glued the viewers to the screens. And in the end, there was just one strong message conveyed through a simple dialogue when the kid asked Wasim “Wasim Bhai, aap thaktay naheen hain?” and he replied, “Main cigarette nahen Peeta!”

This was just another beautiful TVC. The two Pakistani cricketers highlighted were Shahid Afridi, who had recently joined the team and scored the fastest century, and Saeed Anwar, who had established himself as an opening batsman. During the innings break, both batsmen fought to get their hands on the last bottle of Pepsi.

Afridi got it first, but Saeed Anwer showed him that only he had the opener, which could remove the bottle cap. The TVC used pun, for Saeed Anwer was always an opening batsman for Pakistan and was also an opener then.