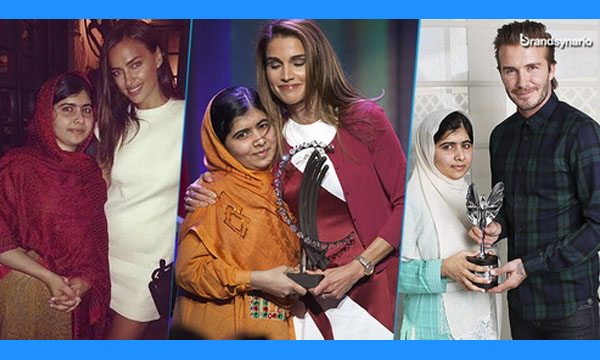 Malala Yousafzai is young, smart, intellectual, active and innocent; above all she is captivating, and she knows how to make an impact! After she was shot in the head by Taliban in 2012, the world united in its support for her – the general public took to the streets, journalists from across the globe ran to take her interview and many prominent personalities donated heavily to support her noble cause.

The brutal attack did lead to one positive thing for Malala, it made her a role model and moreover a celebrity with the power to persuade even the most high profile celebrities to pose with her and support her cause.

We have captured some of the amazing moments to show you how Malala has influenced Hollywood. Take a look!

These 3 women are changing the world. They’re also on my premiere week, starting September 8th. pic.twitter.com/LIfey50L6C

The pride of Pakistan talked to DeGeneres about her mission to ensure education for young girls all over the world. All praises for Yousafzai, the anchor shared this on her Facebook page. Pop star Madonna dedicated a song to the education campaigner and Stenciled Her Name Across Her Back in a Concert in LA. Justin Bieber, the Pop Idol known for His Good Deeds Also Had a Video Chat With the Pakistani activist.

He Posted a Screenshot of the Chat for His Fans. The Star is Expected to Meet Malala In the Near Future to Discuss Ways He Can Support Malala fund. David Beckham Gave the Pride of Britain Award to the Schoolgirl and Said He is Very Privileged to Present This Honor. Angelina Jolie Has Always Stood By Malala’s Side and Praised Her Courage. She Has Teamed Up With The Teen to Support Girl’s Education.

The Actress Has Donated More Than $200000 to the Malala Fund. She recently tweeted “What an honor to meet and have dinner with Malala Yousafzia @malalafund. Thank you for your work on behalf of women everywhere #inspiringwomen #womensrights #educationforallgirls.” Malala With One of the Most Known Faces of America – Jon Stewart. And Finally, It Was Time for Royalties and Presidents!

The Obama Family Entertained Malala at The White House.