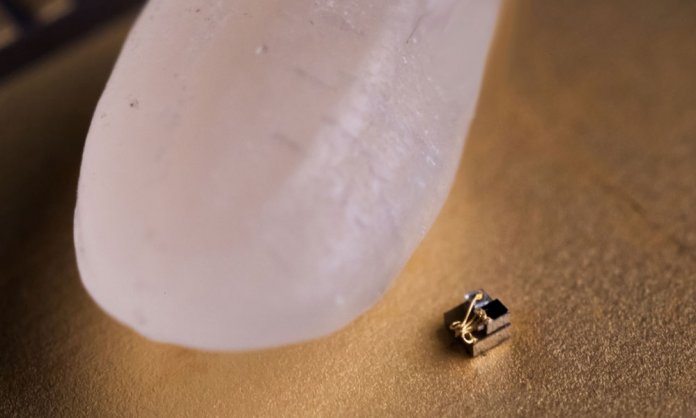 Researchers at the University of Michigan in the US have developed the “world’s smallest computer.” With sides measuring just 0.3 mm, the device is dwarfed by a grain of rice.

Although the jury’s still out on whether it can technically be defined as a “computer,” this tiny device features a processor, RAM and wireless transmitters and receivers. It receives and transmits data with visible light. A base station provides light for power and programming, and it receives the data. The research was carried out in partnership with Fujitsu.

For the time being, the only practical application of this light-powered 0.04mm3 wireless and batteryless sensor system is as a precision temperature sensor. The device is capable of reporting temperatures in minuscule regions — such as a cluster of cells — with an error of about 0.1°C. It could, therefore, find use as a precision measurement tool in the medical field, with applications in oncology, for example, for measuring temperatures in tumors.

The news comes after IBM unveiled a 1x1mm “computer,” smaller than a of grain of rock salt, in March 2018. This fully autonomous device essentially comprises of hundreds of thousands of transistors and some RAM, and, like its tiny rival, is powered by a photovoltaic cell. IBM’s device is billed for use as a kind of trust anchor, attached to or embedded in a product as a mark of its authenticity or for traceability purposes, in a bid to help stamp out counterfeits, for example.