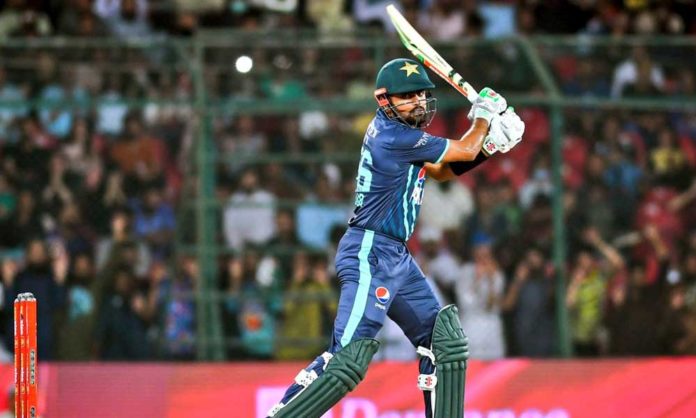 Karachi’s national stadium was abuzz last night with loud roars and cheers from the crowd, celebrating the return of Babar Azam in full colours. The chants emanating from the stadium were so loud that one could hear it kilometres away, and why not? This was more than a match won; Babar Azam silenced his critics with a magnificent century in the 2nd T20I against England.

Ever since, the first game of the Asia Cup, Babar Azam has been criticized heavily for his low score, lack of intent, and low strike rate, and the volume of that criticism has kept increasing with every game. Babar Azam accumulated only 68 runs from 6 outings at the strike rate of 107.93.

Although the whole Pakistan lineup was criticized over questionable team selection and low strike rates, captain Babar was in the line of fire because he failed to fulfill the expectations of the nation.

Strike rate mongers questioned his intent and demanded his demotion in the batting order to accommodate an aggressive batter at the top, who can play with ‘right intent’.

As Former fast bowler Aaqib Javed, said “These two openers are not going to win you tournaments. Take the two openers (Babar Azam and Mohammad Rizwan), the number one and number two players in the world. But such a player should know what to do”.

However, the team management, did not press any panic button over the criticism and continued with Babar Azam and Rizwan at the top in the series against England and have already announced them as openers for the upcoming T20 World Cup. They also backed the players who participated in the Asia Cup, and almost kept the same team for England series and T20 World Cup.

Babar Azam was also questioned about the criticism in a press conference, and he looked very confident about bouncing back, saying the team doesn’t bother about all the noise outside the dressing room.

“We don’t listen to those from the outside sniping. There’ll always be criticism, and if you don’t do well, people are waiting to pounce. The fans always support us” said Azam.

Babar Azam showed glimpses of excellence in the first T20i against England, but could not capitalize on the good start. But in the second game, he walked down the ground with the intent to chase down the mammoth total of 200.

Deafening noise in Karachi for Babar Azam's hundred and his winning boundary. Some stunning shots in an unbroken 203-run opening partnership with Mohammad Rizwan to square the series

At the innings break, a target of 200 looked like a stiff task, even at a ground where average scores are high and three chases out of five are successful. Many fans have already lost hope there, considering the low strike rates of openers and unreliability of the middle order.

Babar started the chase slow and steady, while Rizwan kept taking risks, surviving twice, but as the saying goes, ‘luck favors the brave’, Babar brought up his half-century off 39 balls, and with eight overs remaining, the required rate, climbed to 12.

This looked tough, with two accumulators at the crease, however, when the going gets tough, the tough get going, and Babar Azam turned the beast mode on right there and he took control of the situation. After a lean patch in Asia Cup, Babar was back with a roar.

He hit English bowlers all over the park and the crowd, overjoyed with the return of the King to his kingdom, began chanting “Babar, Babar!”

The whole atmosphere was buzzing as he nudged Curran into the covers for the single that made him the first man to hit multiple T20I hundreds for Pakistan, only 23 balls after acknowledging the applause for his fifty. Karachi stood to celebrate the masterful innings by Lahore’s favorite son.

After that, the match was almost over, they just had to fulfill the formality of completing the target, as the English team has already bowed down to the onslaught of Babar Azam, supported by Rizwan, who was overshadowed by Babar Azam’s masterclass.

Babar Azam ended the innings at 110 runs off 66 balls, with eleven fours and five sixes, while Rizwan played an equally good knock of 88 runs off 51 balls with the help of five fours and four sixes.

Chasing 200 without losing a wicket 😱 What an incredible batting display by the best in the world!! Babar Azam & Mohammad Rizwan putting on an absolute exhibition tonight 🔥👏 They timed that run chase to perfection! Well played @TheRealPCB 👏 #PAKvsEng

Pakistan chased the total in the final over without losing any wicket, breaking the record for the highest successful chase in T20 history without losing a wicket. The previous highest was 184 by Kolkata Knight Riders against Gujarat Lions in 2017, while the previous best in T20Is was 169 by New Zealand against Pakistan in 2016.

Record: Babar Azam has 10 hundreds from just 84 innings as a Pakistan captain.

Babar Azam has proven to the world that he is arguably the best batter across the globe. Even though he was criticized for his slow starts and intent to accelerate, he threw all those narratives out of the park last night.