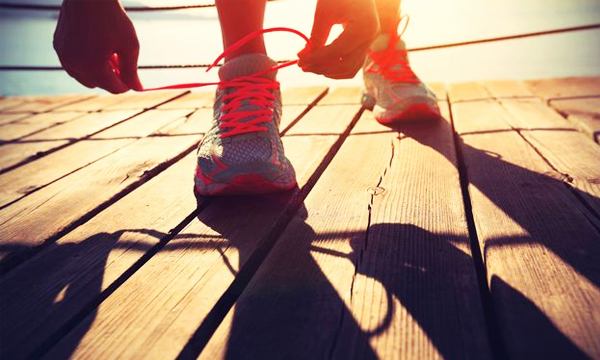 Stroll around the office or neighborhood six times a day, and earn $1.50 toward your health insurance. Step up activity a bit more and bring the total to $1,400 annually.

The catch: you need to wear a special activity tracker that monitors steps taken “intensity” levels and other physical indicators.

That’s the offer in a new insurance product marketed by UnitedHealthcare, the second-largest US health insurer, one of many programs aimed at boosting physical fitness and reducing health insurance costs for employers and employees.

“One of the greatest challenges we have is how to incentivize and motivate individuals to be accountable for their own heath and well- being,” said Steve Beecy of UnitedHealthcare.

He called the Trio Tracker device, introduced with technology partner Qualcomm, “a game-changer.”

Across the US, employers are stepping up the use of technology in “wellness” programs that encourage healthier lifestyles.

Wellness programs aren’t new, but technology like activity trackers has transformed them with more precise measurements and automated uploads to verify activity.

A survey of more than 200 large employers by the National Business Group on Health found 37 percent used activity trackers in 2015 and another 37 percent planned to adopt the technology in coming years. “There is a strong interest (in the use of technology) because of the impact on an employer’s long-term health care costs,” said Scott Marcotte of Xerox Human Resources, which participated in the study.

Makers of activity trackers such as Fitbit and Jawbone have been expanding their efforts to be part of corporate wellness programs.

One of the biggest tie-ups was announced last year when US retail giant Target said it would offer free or discounted Fitbit trackers to its more than 300,000 employees.

As a further incentive, Target said it would allow teams of employees which log the most average daily steps to collect more than $1 million for local non-profit organizations.

This strategy of providing financial incentives for healthy activity is known in the industry as “gamification.”

“We have a lot of clients who want to subsidize the program and make it free, but it’s less effective,” Fleming said. “There has to be both a carrot and a stick.” One program being offered through health services firm Vitality Group provides an Apple Watch for $25, a fraction of the retail cost. But employees must “pay” for the device by completing workouts and gym visits each month.

Growth in such programs over the past few years coincides with incentives to meet Obamacare goals on preventive care, and with new research suggesting that more activity can ward off many medical ailments.

But the new programs raise questions about private data collected and stored by insurers.

While employers and insurers must comply with US privacy regulations so that health data cannot be seen or used by employers, critics still worry.

“While some employee wellness programs and the data collected may be protected under (federal privacy law), others may not be.”

A report this year by the University of Toronto’s Citizen Lab warned of potential problems. For example, there have been situations where fitness tracker-related information was introduced in sexual assault cases or personal injury claims.

“Such data, if it can be manipulated, brings such evidence into question as well as the broader trustworthiness of fitness tracker data … there are also concerns that the radios in fitness trackers could be used to monitor their wearers’ movements,” the report said.

Barbara Duck, a technology consultant who writes a blog on health privacy, said the financial incentives are not worth it.

Duck said that although insurers cannot sell or disclose personal health data, “they can put a score on your head and sell that.”

“It’s not about making you healthier in the long run, it’s about collecting more data to sell and to score you with,” she said.

Also, some employees will feel compelled to participate because they cannot afford the financial penalties if they don’t, Duck said.

Sales of wearable tech devices surged nearly 200 percent in the third quarter of last year to 21 million units, according to the latest IDC survey.

Some surveys show as many as 20% of Americans use a fitness tracker.

IDC analyst Lynne Dunbrack said it will take the time to see if fitness trackers take hold in the workplace and achieve their goals.

“Part of the challenge with these programs is that the ones who tend to use it the most and stay with it are not the target population for the chronic problems,” she said.