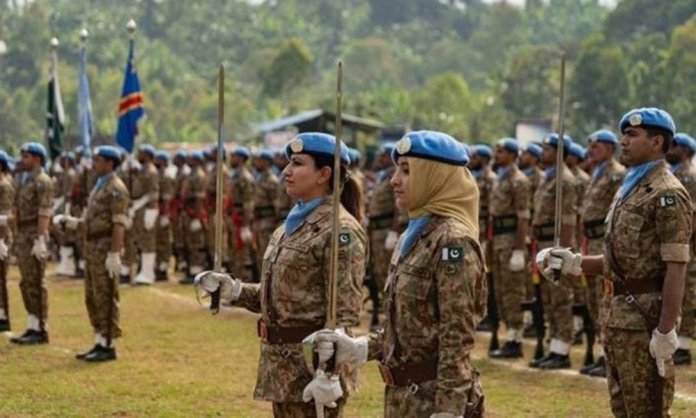 On Wednesday, The United States Principal Deputy Assistant Secretary for South and Central Asian Affairs Alice Wells communicated that she was extremely inspired by the award-winning Pakistani female peacekeepers serving in the conflicting Democratic Republic of the Congo (DRC).

“Inspired by Pakistani women serving with distinction in the UN peacekeeping mission in the DRC,” stated in a tweet posted on Wells behalf by the State Department’s Bureau of South and Central Asian Affairs.

Inspired by Pakistani women serving with distinction in the @UN peacekeeping mission in the DRC. The first Pakistani all-female group of 15 peacekeepers received medals last week for their work performing a range of services to the conflict-affected eastern DRC. AGW 📸credit @UN pic.twitter.com/3puYU7r4WW

Alice Wells, in her tweet, applauded the first Pakistani all-female group of 15 harmony keepers who were awarded medals a week ago for their work performing a range of aids to the conflict-affected eastern DRC.

Initially this month, Pakistan’s female peacekeepers,  stationed with the United Nations Organisation Stabilisation Mission in the Democratic Republic of Congo (MONUSCO), were granted a UN medal at a ceremony in Adikivu in South Kivu, one of the regions of the central African country.

The squad of 15 female officers, who serve at the ranks of major and captain, have been posted in the war-torn country since June 2019.

These Pakistani women are #ServingForPeace in the Democratic Republic of the Congo. They are military personnel, police officers, software engineers, psychologists, doctors & gender advisers.

Our country has an extended history of sending its troops to various UN security missions and has also been known as one of the biggest supporters of troops and police for decades.

As claimed by the UN, Pakistani troops are presently assisting in seven UN operations, with the substantial majority of them deployed in the Democratic Republic of the Congo, the Darfur region of Sudan and the Central African Republic.