Leading Pakistani actress, Urwa Hocane has recently come under fire for her latest pictures. Urwa is among those celebrities who are quite active on social media to keep their fans updated at all times.

This isn’t the first time Urwa Hocane has come under fire. Previously, the celebrity has also been severely criticized on multiple occasions even when she was seen posing with her husband, Farhan Saeed.

But this time, Urwa Hocane received major flak because of the clothes she wore. Urwa and her husband, Farhan Saeed, were invited to a close friend’s wedding, which was hosted by Adnan Qazi.

Yes, the moral police will always be there to remind you how you should dress, eat, walk, sleep, behave, etc. You name it, and they’ll be there to teach you. However, let’s take a couple of seconds to see how gorgeous Urwa looked as she donned her ivory-colored lehnga and choli!

Here are the pictures that Urwa Hocane posted on her Instagram

Look at those details!

As these pictures went viral, social media trolls couldn’t hold back their negative criticism on the celebrity’s choice of clothing. The trolls bombarded her posts with hate comments and how she should not wear such ‘vulgar’ clothing. Moreover, people also started preaching religion on her posts.

Have a look at some of the comments below.

Some even called her ‘dusri Priyanka Chopra’ 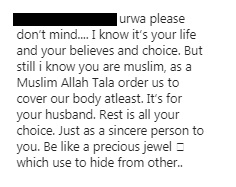 People disliked what she wore

Some even said how she looks better in tight clothes and how disappointed they were to see her in such a dress.

Moreover, being active on social media is not always a pleasant experience. It takes a lot of courage to showcase your life on social media. The keyboard warriors, however, do not understand the seriousness of how badly it affects a person.

Shades of Quarantine! 💭 I have been wondering that I have such mixed feelings about the pandemic! While I am thinking that it’s a global disaster on a human level, I also notice the planet is healing which I feel was so much needed as we had become so careless about harming it and how! While I am missing my mother and my family so so much, I am also grateful that I can be warm & safe at home, I have loved ones that I can talk to and I have food on my table. My heart goes out to all the people struggling right now, be it having to worry about food & health facilities or be it leaving your home to go out and fight on the frontline as a doctor, policeman, etc Stay strong & positive ya’ll & most importantly be grateful & kind & STAY HOME ❤️ #covid19 p.s. I have been enjoying the sunrises & sunsets quite deeply!

In the past, many known and unknown personalities have ended their lives because of cyberbullying. People who have access to the internet and social media platforms should know what cyberbullying means and its effects.

What are your thoughts on this matter? Let us know in the comments below.