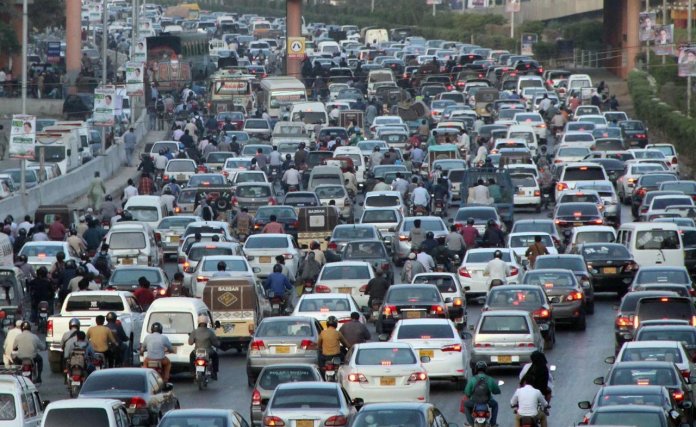 In a country riddled with a plethora of problems, one may find it easy to forget about minor dilemmas and their long-term consequences. These seemingly unharmful situations are obscured by the shadows of much more dangerous, demanding and drastic issues. A good example of this is the traffic congestion in major cities of Pakistan.

In recent years due to rapid urbanization, traffic congestion complications are frequently observed in large cities such as Karachi: The City of Lights, where road facilities operate at maximum capacity. This is both dangerous and frustrating for the individual as precious time, fuel and energy is being wasted.

When a car enters an intersection on a green light without there being enough room on the other side of the intersection for it to go all the way through, a gridlock is created. If the same situation was to simultaneously occur in multiple intersections, then these cars can be trapped indefinitely. This causes a pandemonium of noise due to excessive starting and stopping of vehicles. Moreover, this also increases air pollution. In many jurisdictions, drivers are therefore prohibited from entering an intersection at a green light if there is no room for them to clear the intersection. If all the drivers could follow this rule than the creation of a gridlock would we impossible.

However, it is an established fact that roads in major metropolitan cities are a victim of reckless driving. A fickle system of ensuring whether or not anyone is qualified to drive has been set up; the driving license is even given to those who lack civic sense. The traffic police are nowhere to be seen, roads are abandoned and traffic conditions are miserable. Constant violation of traffic rules and laws has resulted in the loss of human lives, painting a grim picture.

One of the eminent problems faced by all classes of the population is that of road transportation. The roads are too compact and in poor condition to facilitate the movement of cars, taxis, buses and other vehicles. Moreover, constant construction projects in cities also contributes to massive traffic jams! At first glance this may seem like an inescapable and seemingly insignificant problem that has ingrained itself into our monotonous routines, however this affects us negatively in the long term. It is already known that traffic congestion has unfavorable effects on the environment and on our health, and it continues to be counterproductive for a number of economic activities in various cities. Analysts believe that PKR 1 million are lost daily due to the traffic congestion which is extrapolated for the whole of Karachi. The country overall loses 1.5% of its Gross Domestic Product. This is the effect of only one city; these problems are common throughout the country and the populace is still apathetic to finding a concrete solution to this issue.

Many efforts have been taken to accomodate the ever-increasing traffic in urban areas, with the construction of new roads, overpasses and underpasses. Several roundabouts have also been constructed as it is a much safer way to control traffic. However, half-hearted implementation of short-term solutions will not be enough to solve this problem. Overall attention needs to be given to this issue; proper planning and careful consideration needs to be given to this problem by the relevant authorities to help improve traffic management. Improved road designs and future urban planning will help in improving the efficiency of road transportation and will not only satisfy the individual but will also improve the economy and the countries financial position.

The rise in population and ever increasing rural to urban migration has resulted in increased motorization. This has led to crippling traffic congestions in overpopulated cities causing nearly daily gridlocks on the roads. This problem is getting worse with every coming day making it a necessity that new technologies and smart solutions lead the way forward to a more efficient use of our time and resources. This will require significant investment and time, both of which the government will struggle to provide. Until it is finally given the attention it deserves, this seemingly small problem has firmly integrated itself into every individual’s daily routine.

Miangul Saad Sikandar is a student of Aitchison College and is passionate about the environment and global warming.

5 Places To Find The Most Delicious Chinese Food In Karachi

7 Health Apps You Should Have In Your Smartphone

6 Places To Find The Most Delicious Chicken Wings In Karachi