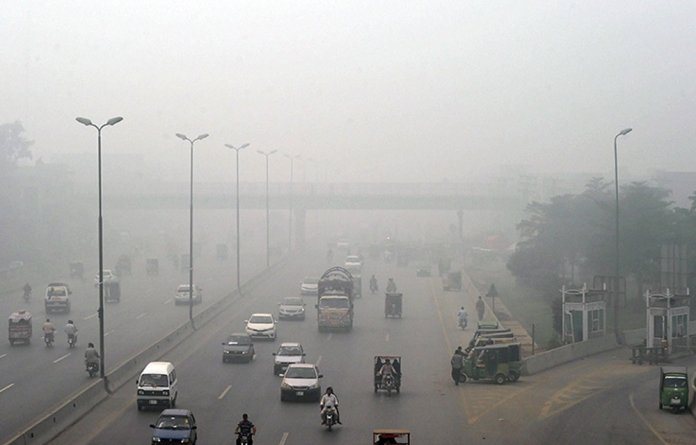 An intense fog has engulfed Lahore, affecting breathing and visibility, forcing the residents of Lahore to stay at home.

However, the smog is man-made, a mixture of smoke & fog, created by nitrogen oxide, carbon monoxide, sulfur dioxide and other aerosols. It is highly toxic and can be extremely harmful to the lungs, eyes and the nose.

According to the MET Office, shallow foggy and misty weather conditions are expected in plain areas of Punjab and upper Sindh during morning hours.

Over the past years, a thick smog descends in Lahore every December. However, the situation has aggravated over the past 5 years owing to poor quality of air and increasing pollution. Deforestation and rapid industrialization are one of the vital causes.

The adverse climate is causing is proving to be quite detrimental to health, resulting in breathing difficulties and irritation in eyes for residents.

What is more, doctors and health specialists have warned the patients of asthma to take measures to prevent themselves from the side-effects of smog.

Also, it is wrecking havoc in the cities due to reduced visibility and causing disruption in transportation.

The motorway police have issued instructions to drivers to reduce speed and switch on fog lights to avoid any accidents.

Reports reveal that the dry spell will last for as many as ten days.

#SMOG
“There will be a dry spell for at least 10 days, during which no rain or winds are forecasted.” #Lahore #Pakistan pic.twitter.com/KX2907PCgA

The residents on Punjab are suffering from deep misery due to the ongoing weather situation. They are taking to Twitter to blame the government for not taking any precautions against the deadly climate change and heavy pollution.

Thanks @GovtOfPunjab for cutting so many trees for your so called development projects! We're dying !
#Smog #Lahore pic.twitter.com/LfqxHAJgji

Its been 2 years but there is no special effort by the Govt to reduce #Smog . 0 progress.

90% plantation encircling #Lahore has been eradicated due to illegal logging. Punjab Govt completely ignorant over the issue #Smog

Not cloudy, rather a dense #smog hugs the twin cities. Mix of negligence from citizens n govt. of #pakistan pic.twitter.com/JTU0qcfqMN

While passing through #EmporiumMall one can see the building covered in #smog. Pray for #rain so that its short-term impacts can be avoided. pic.twitter.com/WcXr3SuhrZ

How To Combat Smog In Lahore & Other Parts Of Punjab

Following are the tips and guidelines to follow if you reside in Lahore or any adjoining areas: