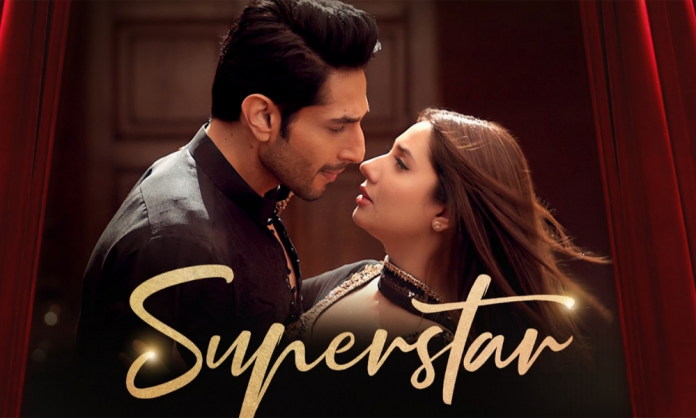 There are films that inspire and films that lead, and then there is Superstar that does both. Mahira Khan’s latest is probably her best work so far, even better than Raees.

Not only does she manage to strike chemistry with a fellow actor who isn’t named Fawad Khan but also raise the bar at a time when people were criticizing her for ‘personal’ reasons.

She neither looks old in the movie (as per Firdous Jamal’s assessment) nor looks wooden (as per super over actor Nadia Khan’s unwanted comment), letting her performance do the talking.

Add Bilal Ashraf and Nadeem Baig into the frame and you get a flick that will not only dominate the box office in Pakistan but also internationally, such as the following of these actors.

Its love at first sight for Superstar Sameer Khan (Bilal Ashraf) who falls in love with upcoming actress Noor (Mahira Khan). However, things take a bad turn when he decides to go for greener pastures and leaves his love, friends, and family behind.

How he ends up in Agha Jaan’s (Nadeem Baig) theatre and does his efforts to get back Noor bear any fruit, watch Superstar and find out the answers.

Fans of Mahira Khan would love the film because it revolves around her; in fact, when Azaan Sami Khan was writing the script he had her in mind all along. Bilal Ashraf does an amazing job as the leading man who can act, dance and romance at the same time.

His fans were expecting him to do a good job but he surprises them all with a superlative performance. Then there are veterans Nadeem Baig, Jawed Sheikh and Marina Khan who make the audience laugh and cry; in fact, they keep the narrative flowing without looking out of place.

The film also introduces Ehteshamuddin to the world of cinema even though he had been making short films for a long time.

The arrival of Mustafa Afridi as a writer is a breath of fresh air because if anyone can write powerful dialogues, Mustafa Afridi is his name. However, it is the young Azaan Sami Khan who excels as the story & screenplay writer, music director and background scorer of the film.

He uses all his training both at home and under his father Adnan Sami Khan to come up with one of the best soundtracks of recent times. Kudos to the producers for sticking to his version and coming up with a film that steers Pakistan’s film industry into the right direction.

Superstar is one of the few Pakistani flicks that the whole family can enjoy; there is nothing cheap or vulgar, be it in the songs, dialogues or even in the story. It’s a family entertainer that entertains, and at a time when Pakistani cinema needs good content, it comes out as the best.

This might be Momina Duraid’s third film after Bin Roye and Parwaaz Hai Junoon but it is the most complete, the most well-directed and above all, the most well-shot film from M & D Films. In fact, no review would be complete without the mention of Khizar Idrees the cinematographer who has done a commendable job.

Watch it for the chemistry of Mahira Khan and Bilal Ashraf, for Nadeem Baig’s atypical performance, for Jawed Sheikh’s different take on family and Ali Kazmi’s bromance with Bilal Ashraf. You will not regret it!

This was first published on VeryFilmi.com