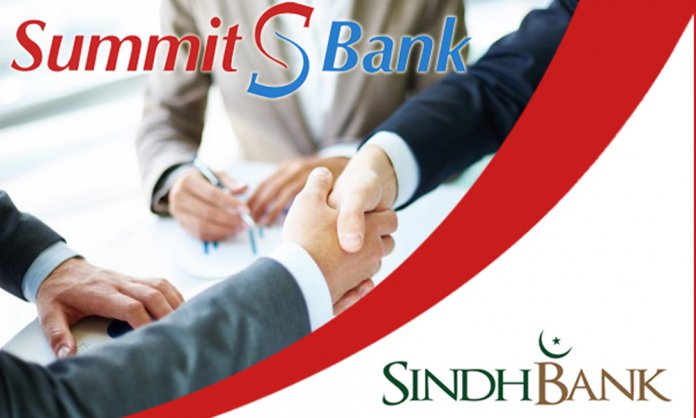 The management of Summit Bank has now finalized the merger with Sindh Bank. The closing date of Summit Bank’s banking operations has been set to December 29th for Karachi, subject to the approval of the State Bank of Pakistan.

From the 29th of December, the banking license for Summit Bank issued by the SBP will be canceled and the branches would be changed into Sindh Bank.

Summit Bank’s board of directors had approved the merger with Sindh Bank and set a share value of bank at par with 3.85 shares as part of the amalgamation scheme between the two banks.

The share swap ratio of 1 new ordinary share of Summit Bank for every 3.85 ordinary shares of Sindh Bank for the merger to take place. The set-up of the share price of the bank is likely to be dependent on the merger of the two banks with a share swap just as it was previously done in the case of MCB Bank and NIB Bank.

However,  sponsors and shareholders will have their stakes in the combined or merged bank.

Syed Raza further added details on the section under which the merger was approved,

The bank will offer its revised share value to shareholders of the bank once it has been given a go ahead by the authorities. Money will also be offered to those shareholders who wish to offload shares of the bank in future.

Summit Bank has been a struggling entity which closed the calendar year of 2016 with a loss of Rs. 2.17 billion. However, a profit of Rs 106 million was posted in the first quarter of 2017. The newly merged bank could now be named as Sindh Summit Bank.

Summit Bank which was planning to convert its operations into Sharia based Islamic banking has now revoked its decision. Whereas, Sindh Bank was to list itself with the Pakistan Stock Exchange and have decided against doing so.