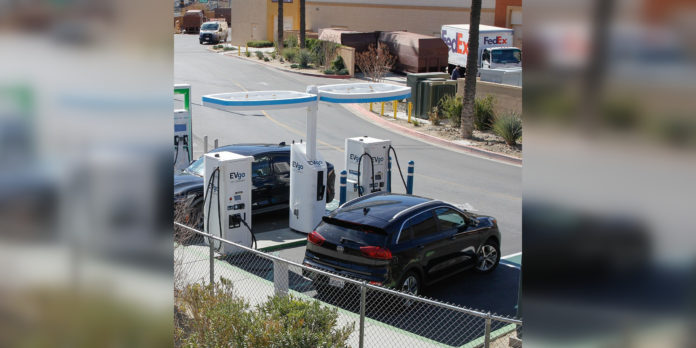 One cannot deny the popularity electrified cars have attained over the past decade. While conventional cars only use one power source, the most common hybrid cars rely on at least two different power sources to function; an electric motor as well as a gasoline engine. So while it may have some benefits, the hybrid technology brings with it a myriad of issues.

To begin with, hybrid cars are only a temporary solution. They use certain kinds of fossil fuels, which further ends up contributing to global warming. So, even if it can be beneficial during the energy transition period, hybrid technology won’t be preferred by many in the distant future. People will go back to using conventional gasoline powered vehicles. It also pollutes our environment by emitting harmful gases as a result of using fossil fuels. This is why in the long run, hybrid technology isn’t the most sustainable way to go.

The technology itself is quite complex, so technical difficulties are a common occurrence and are much harder to fix by yourself as opposed to conventional cars that do not contain a lot of electronic devices. In case your car breaks down, you may have to spend a hefty sum of money in order to get it up and running again. It also goes without saying that the overall performance of a conventional car is much better than a hybrid one.

It isn’t economically and financially feasible for a developing country like Pakistan, where the majority of our electricity is generated using fossil fuels and imports amount to as high as $70 billion, to provide duty or tax concessions for hybrid vehicles which is an expensive technology in its own regard. It also doesn’t help that hybrid vehicles have a high payback of 7 years or 200,000 kms. Take a look at the table below to understand how that happens. 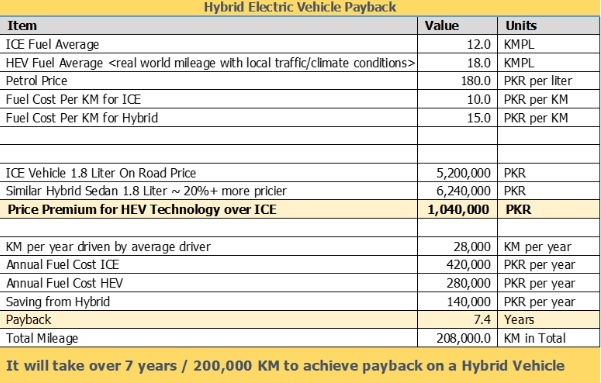 This isn’t just limited to hybrid cars. Any electrical vehicle has a payback of ten years. Take a look at the table below to learn about it. 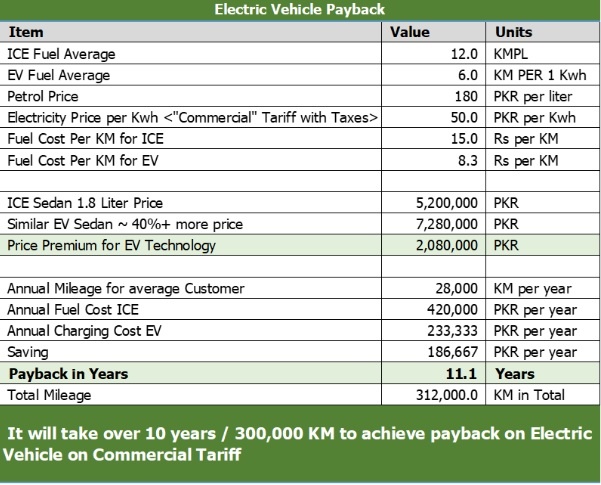 People who strongly oppose hybrid technology often claim that instead of wasting money on  technologies which will eventually become obsolete in the near future, we should take steps on making the change from fossil fuels to renewable energy sources. This also proves the argument why hybrid cars are nothing but a false promise that should have never been made to us.