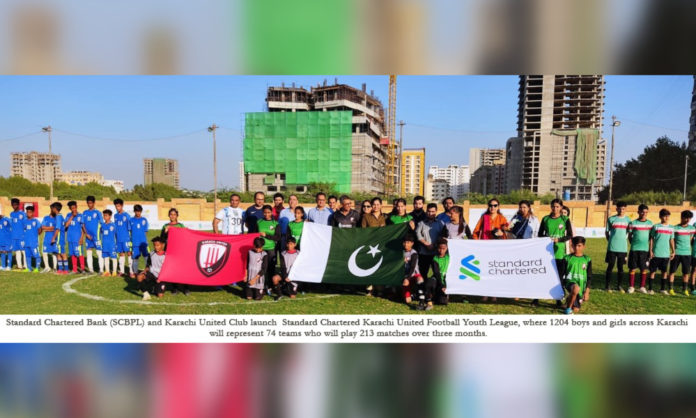 Karachi, 25 November 2022: Standard Chartered Bank (SCBPL) announced the launch of its “Standard Chartered Karachi United Youth League” as part of its community service mandate to promote sports amongst children. This is the fifth year in a row that the Bank is sponsoring the league in what has become part of the local football fabric and culture, for the opportunity the league provides to over 1000 children annually.

The objective of the “Standard Chartered Karachi United Youth League” is to provide a platform for youth football teams from across the underserved areas of Karachi to come together, break barriers and inculcate the spirit and culture of sport and competition.

At the beginning of the year, Standard Chartered Bank and Karachi United also organised a Youth Football League in Islamabad where more than 400 children (boys & girls) participated.

The Bank has been sponsoring this league since 2017, supporting over 4000 children through sports.

This year’s league will see 1084 boys’ competitions in the following age categories: Under 10 years, Under 12 years, Under 14 years, and Under 16 years including a Government School competition. The format is that of a group system from which the top teams qualify directly for the quarter-finals and beyond. The Standard Chartered KU Youth League will also increase girls’ participation (through a Girls’ tournament) this year to 120 girls.

A total of 213 matches will be played in six different locations including Old Golimar, Shireen Jinnah Colony, Malir, Baldia, Ibrahim Hyderi, and Orangi Town, which promises to attract football fans from all over Karachi. In order to increase the standard of the league, kits are provided to each participant along with the appointment of official referees and match commissioners for every match.

Commenting on the sponsorship, Rehan Shaikh, Chief Executive Officer, Standard Chartered Pakistan said, “Standard Chartered is proud to partner for the fifth year with Karachi United to bring to you the “SC KU Youth League”. In line with our brand promise Here for good, it is a unique event spread over the next few months, which aims to bring underserved communities together. We hope that through Football we can bring a positive social benefit to our society.

Over the last four years more than 4000 children went through the SC KU league experience which was not only restricted to Football, but also included coaching in life skills, teamwork and other areas of life in general. The Bank has had a long association with football and we are proud to be leading such a transformational initiative with Karachi United in Pakistan.”

Imran Ali, CEO, Karachi United said, “We would like to thank Standard Chartered for their continued support of the Youth League as it has become part of the community culture and football calendar. Such is the impact of the league that community stakeholders and coaches have already been in preparation for the last three months. This has helped engage with the youth in an organised and healthy activity.

Additionally, and significantly, in line with SC’s Future Makers program, we have started witnessing former Youth League participants become coaches for their teams and continue their education. We are committed to this program and look forward to developing more Future Makers as a result of this league.

Lastly, our coaches continue to benefit from the linkage with Liverpool FC’s Train the Trainer program. The syllabus and coaching methodology has been implemented across all Community Centres and we now look forward to engaging Government schools to amplify the impact.”