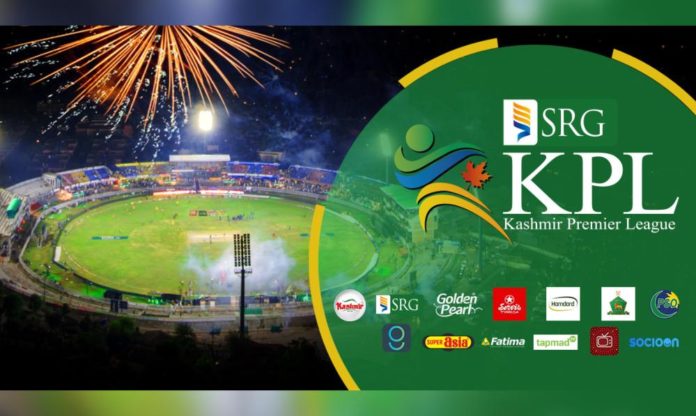 The SRG Kashmir Premiere League has received nationwide acclaim for since its launch both locally and internationally. With over 5.6 Million live views generated within the first day, it has successfully become Pakistan’s most-viewed live sports event launch on Digital.

Within the first 5 matches, despite one rain shower, the league successfully bagged 15 million views in three days, with RawalKot Hawks (spearheaded by Shahid Afridi) and MirPur Royals (headed by Shoaib Malik) taking the spotlight as the most-watched opening match for any tournament on digital media in PK.

Zohaib Hisam, (CDO Blitz Group, broadcast partners KPL) commented, “This is really an unexpected turn of events – the general air among the media/advertising nexus regarding the event was mixed, but it is really refreshing to see that the nation is behind this league, all guns blazing. Though MNC’s have shown skepticism regarding participation in the tournament at first, heads are turning. We would want to thank local homegrown Pakistani brands for showing unconditional support to the cause, specially our Digital partners Golden Pearl Cosmetics, Bank AlHabib, Fatima Fertilizer Group, Hamdard Pakistan, Tapmad TV, our sponsors and technology/broadcast partners Jazz TV, Jazz Cricket, Goonj, Crickwick (Khaleef Technologies), Socioon and the KPL Digital team as well.”

With SR Group taking nomenclature rights, participation on on-ground has also been refreshing, along with over 12+ brands (key partners including Servis Tyres, United Industries (Kashmir group), Super Asia and PSO) and energizing crowd attendance, cricket has definitely arrived in Kashmir.

Muhammed Ejaz, Business Head Servis Tyres stated, “Servis Tyres is proud to sponsor the first-ever season of Kashmir Premier League. Servis Tyres believes in supporting and promoting the game of cricket – a passion of most Pakistani people –  with the hope of nurturing new talent. Servis Tyres has always supported Pakistan Cricket at various levels and believes sports to be an essential pillar of the community. Good luck to all the players and we hope to see competitive cricket in the league.”

Mian Shahzad Khalid Director Marcomms. United Industries remarked, “Of all the cricketing events, I am most excited for the upcoming Kashmir Premier League. The mix of adrenaline and sportsmanship against the beautiful backdrop of Kashmir’s Muzaffarabad will make this an event to remember. More importantly, this event will project Kashmir’s image as a soft and peace loving place. Kashmir Banaspati and Oil is incredibly happy and grateful to be a sponsor for this event.”

“Allah has blessed our nation with a gift near our national independence day, in the form of the KPL. We are one of the very few nations of the world that came into being without violence, through legislation. Our tournament in AJK with local and international participants is testament to our commitment for peace and stability within the region. Let us hope that this can serve as an example for future generations, we look forward to all nations participating in this message of peace.” – CEO KPL Ch. Shahzad Akhtar.

“This is a message of peace from Pakistan for all nations. We would like to thank our fans, sponsors and brands for making the Kashmir Premiere league a smashing success, despite the hurdles faced. We look forward to making this league an international icon over the years to come. I would want to congratulate my team (KPL), the players, the franchise owners, our partners Blitz (Broadcast), Transmedia Group (On-ground), production partners TPT, SRG, and all our sponsors, and most importantly, our viewers and fans, for making this dream a reality. Pakistan Zindabad, Kashmir Paindabad.” –  President Arif Malik – KPL.

The tournament is expected to catch fire with independence day celebrations approaching, as crowds glued to their screens to watch their favorite rivalries in the stadium, with the jubilant crowd of Azad Jammu n Kashmir cheering them on. It is a much-needed breath of fresh air for the region, and a sparkling example of how sports diplomacy can be used for world peace.