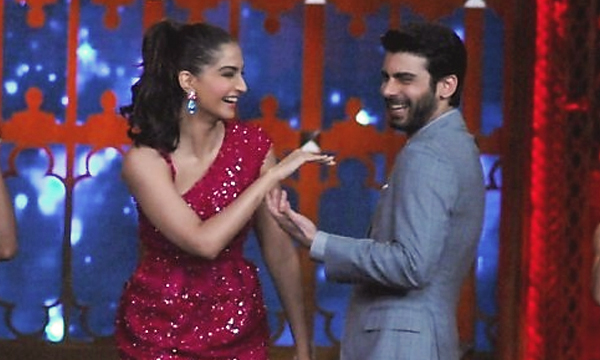 Celebrating the 4th year anniversary of Khoobsurat, Sonam Kapoor takes us on a ride back to the sets of the 2014 film that also marked Fawad Khan’s debut in Bollywood.

The dazzling diva of Bollywood took to her Twitter account to cherish the unforgettable memories from the set of this rom-com and the fun she had with Fawad Khan during its production.

Khoobsurat was truly an unforgettable experience! I still remember all the behind the scenes fun and laughter we had while filming. 😍😍@_fawadakhan_ @KirronKherBJP @RheaKapoor #4YearsOfKhoobsurat pic.twitter.com/xKvUDlv11K

In this short clip, Fawad and Sonam can be seen having fun on the sets of Khoobsurat that also led to the start of an adorable friendship between the two. Kiron Kher, who played Sonam’s mother in the film, can also be seen having a good time with them.

Sonam played the role of Mili, a carefree girl physiotherapist with lively hopes, who falls in love with Vikram, Fawad Khan, who by the way made a wonderful prince charming.

Fawad’s first appearance in Bollywood not just earned him a huge fan following in India but also, the best male debut award at Filmfare and Masala Awards!

Although Khoobsurat did not prove to be a big hit, the oh-so-perfect chemistry between Fawad Khan and Sonam Kapoor was totally drool-worthy!

Pouring out her emotions towards Khoobsurat, Sonam shared this BTS video with the most adorable caption. She wrote,

“Khoobsurat was truly an unforgettable experience! I still remember all the behind the scenes fun and laughter we had while filming. 😍😍

This is not the first time that Sonam has talked about how much she loved working with Fawad Khan.

On Fawad Khan’s birthday, she also sent a super cute birthday wish to our superstar with an adorable picture.

A very Happy Birthday Fawad! 🎂 Hope you receive all the joy & happiness on this special day! @_fawadakhan_ pic.twitter.com/ueSK6j3ofT

It’s really nice to see how Fawad and Sonam have become good friends. This gesture of acknowledgment among artists should be appreciated more!