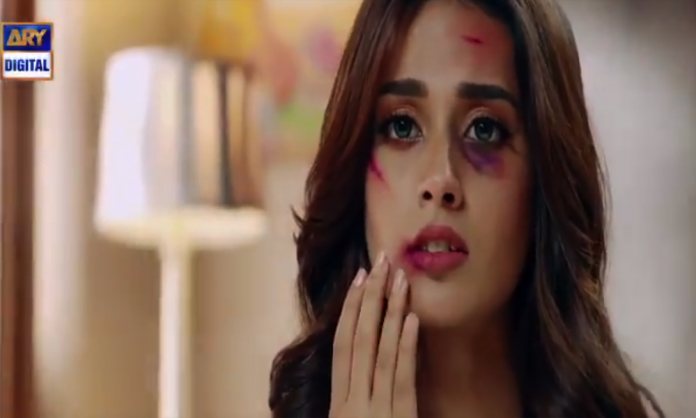 Titled ‘Jhooti’, the drama has two trailers and while the first one seemed like the plot is intriguing, the other caused havoc on social media.

The trailer implies that Aziz is playing a woman who is pretending to be a victim of domestic abuse, leading us to wonder if this is what makes her character a jhooti.

Here is the first trailer of the upcoming drama serial:

In the teaser clip, we see a bruised Iqra Aziz calling out men for the abuse of power. On the verge of tears, she points at her bruises as evidence of what her terrible husband did to her.

When she is about to burst in tears, we see a speck of deceit in her eyes. The next few glimpses indicate that her character may have done this to herself. Finally, she applauds herself, as she was rehearsing in front of the mirror.

The Twitter users did not appreciate the drama plot and were unhappy with ARY Digital.

this is fucking disgusting. congratulations for playing your part on stereotyping Pakistani women as pathological liars who make up their trauma for fun. down with every single one of you. scumbags. https://t.co/uF9E6fB6gk

They also said that women are already doubted in our society and such shows are no highlight of the industry.

The society already doesn’t believe in the physical, emotional, sexual abuse women face, and shows like these don’t help. They minimize the struggles encountered by everyday women. https://t.co/fN2u3VRgml

Roughly 5000 women get killed every year in domestic violence cases in Pakistan. This is the most tone deaf, insensitive shit someone can pull off. Bravo kanjaru https://t.co/6l2xd6cshh

What sort of Bullshit production is this?#Jhooti i.e. portraying Pakistani women as liars over the domestic abuse and violence is tbh not cool

WTF is the producer of this drama??? https://t.co/wg9wdI5CdU

More people spoke up against the trailer and it what showcased

This is absolutely disgusting. You’re trivialising domestic abuse & reinforcing stereotypes that the woman is always lying about her abuse. Stop dismissing real issues experienced by millions of women daily. @iiqraziz @ahmedaliB @aryddrama this is NOT ‘entertainment’ https://t.co/0t6DrOdcUi

Twitter users were not happy with the teaser of Jhooti and that’s crystal clear.

Pakistani dramas should get an award for being absolutely insulting and demeaning to a whole new level. Instead of creating awareness about domestic abuse, they decide to create a drama that makes a joke out of domestic abuse. Pathetic and absolute garbage, shame on iqra aziz https://t.co/Ld4GkvS6Jr

For Gods sake this has to stop! It’s already a miserable life for victims out there who do get the courage- this is sick! It gives justification and value to the abusers who say “dekha jhoot bolti hain sub” #stopairingjhooti @AryDigitalDrama

Here’s the trailer number 2 of Jhooti

Let’s see what the upcoming drama serial brings to the table and if it will be a yay or a nay for the masses. Up until now it seems to be receiving a lot negative feedback.