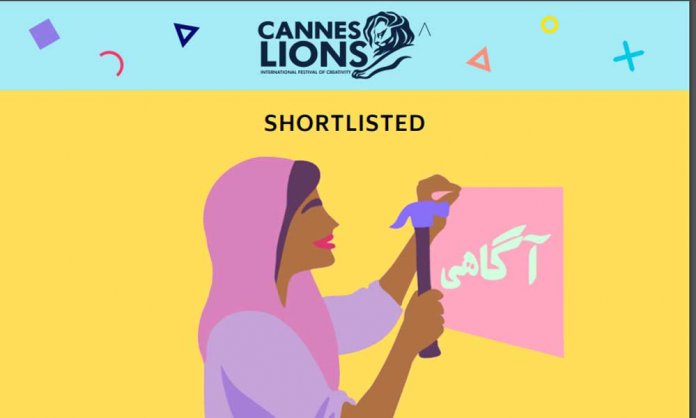 AAGAHI, which literally means awareness, is a public service campaign with an aim to educate women about their legal rights in Pakistan and is nominated for the Sustainable Development Goals Lions in the Gender Equality category.

AAGAHI is indeed the first Pakistani awareness series to be nominated for Cannes Lions. The winners will be announced during the Cannes Lions Good track award ceremony tomorrow.

“AAGAHI is a campaign designed to create awareness in women so they are able to navigate the police and judicial system with confidence in Pakistan. The impact created in rural and urban communities through AAGAHI has been tremendous and we at SOC Films are delighted to be shortlisted for the Cannes Sustainable Development Goals award,” said Sharmeen Obaid-Chinoy on her first Cannes Lions nomination.

Over the course of the past seven months, SOC Films released a series of short animated films in Urdu explaining and clarifying the legislation which affects women; and giving an overview of how the legal provisions granted to them may be applied, such as; how to file an FIR, what does the law state on instances of domestic violence, divorce, cyber-crimes and inheritance and what is the procedure for reporting issues like these and who should be approached for help.

Each short-film was designed and produced by SOC Films and covered the law, its interpretation, and the safety that it provides to the victim. This also included the legislation, as stated in the Pakistan Penal Code, and the various case laws, which have been passed or revised in recent years. One of Pakistan’s leading actresses, Aamina Sheikh lent her voice for the series. AAGAHI has been produced in collaboration with Women Action Forum Karachi.

Indeed, at The 66th Cannes Lions International Festival of Creativity, over 30,000 pieces of creative and effective work from 89 countries, in 27 distinct creative disciplines, will be awarded and celebrated at the Festival, setting the global benchmark for creativity and effectiveness. More than 400 jury members, from over 50 countries, have now convened in Cannes to judge the work, which will be celebrated across five evening Awards Shows.

Cannes Lions is committed to campaigning for creativity as a powerful force for good in the world and has partnered with the UN to support the Sustainable Development Goals through a range of creative initiatives at the Festival. The Goals House in Cannes is a focal point for the strategic-thinking needed to make the United Nations’ Global Goals a reality.

Since its first outing in 1954, the Cannes Lions International Festival of Creativity has been bringing the creative communications industry together every year at its one-of-a-kind event in Cannes to learn, network and celebrate.