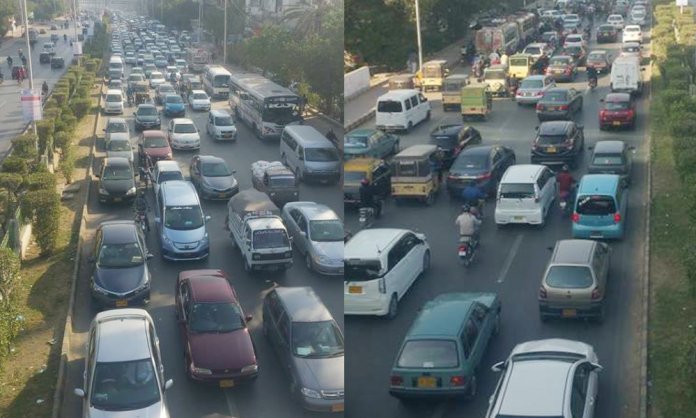 It was supposed to be a usual day for many of us Karachiites! The metropolis was already geared up to brace the harsh winter winds. But who knew that a massive traffic jam is all set to strike the city all over again!

Yeap, the citizens woke up to a crazy traffic that nobody saw coming. Despite the fact that the citizens now don’t bat an eye on the daily traffic problem, having made peace with that fact; the traffic in the metropolis has recently surpassed an average Karachiites patience level.

THAT TOO SO EARLY IN THE MORNING!

#Karachi_Traffic_Police seems to be under staffed. Even major roads & intersections are without monitoring.This situation is deplorable and must be rectified. #Karachi also needs many more properly marked #zebra_crossings &overhead_pedestrian_bridges

SO BASICALLY EVERYBODY’S DAY GOT RUINED!

and one pathetic traffic jam at shahraefaisal, on your way to office can still make it worse.

While everybody is clueless about this uncalled morning surprise, it seems that development work is causing all the blockage!

Road carpeting between peak hours is causing all the chaos at Shahra-e-Faisal from Baloch Colony ramp to Regent Plaza.

It is suggested to stay updated with traffic and plan accordingly to avoid being unnecessarily stuck for long hours.