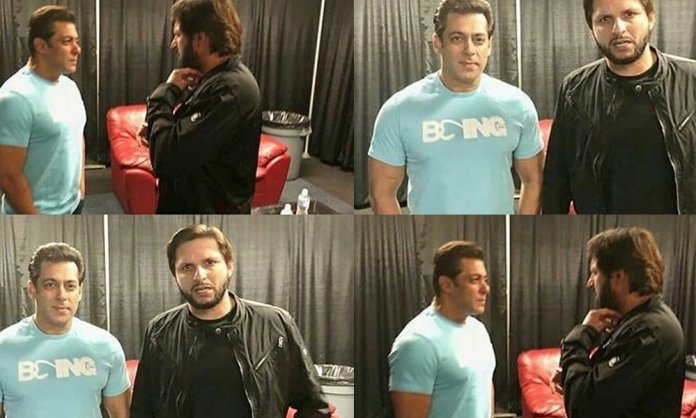 Shahid Afridi is making sure his revolutionary ‘Shahid Afridi Foundation’ and its manifesto of ‘Hope NOT Out’ travels all over the world.

In a bid to elevate the existing health and education system in Pakistan, Lala is leaving no stone unturned to unite his fans to donate for the noble cause.

The cricketer is currently in Canada to play for Edmonton Royals in Global T20 Canada Cricket League. At the same time, Afridi has also grabbed the golden chance to promote his mission in the North American realm.

The best part is that Boom Boom was invited to Bollywood’s Dabangg Reloaded Tour for and a house-full crowd of cheering fans welcomed him in the arena!

It was indeed a proud moment for Pakistan as Afridi made a speech, inviting the Hindu-Muslim community to come together to spread love and peace.

But even more exciting is Boom Boom’s rendezvous with the Dabangg hero himself, Salman Khan!

The pair met backstage and discussed how they can collaborate to make a social difference in India and Pakistan.

Too much greatness in one frame!

It won’t be a surprise if we will soon hear the Indo-Pak Khans uniting soon for a noble cause!

Later, Lala took to Twitter to express his pleasure of meeting Bajrangi Bhaijaan and wished him good luck for the grand event.

Great to meet @BeingSalmanKhan today with community members . All the best for the event. pic.twitter.com/SLFtdSmkqX

Time and again, Boom Boom has made our hearts swelled with pride with his dedication and efforts for the Shahid Afridi Foundation.

Indian cricketers like Virat Kohli and Harbhajan Singh have united with our cricket superstar to raise funds.

Back in May, Canadian Prime Minister, Justin Jtureau requested the nation to contribute toward Afridi’s charitable cause.

Also in a video message, American politician, and wife of Bill Clinton, Hillary Clinton had extended her support towards #HopeNotOut!

Thank you @HillaryClinton for supporting the cause of #Humanity and your best wishes.

The Shahid Afridi Foundation was established in March 2014 and is devoted towards providing relief to humanity through better education and healthcare services.

Let’s see who Afridi ropes in next for his ground-breaking platform.