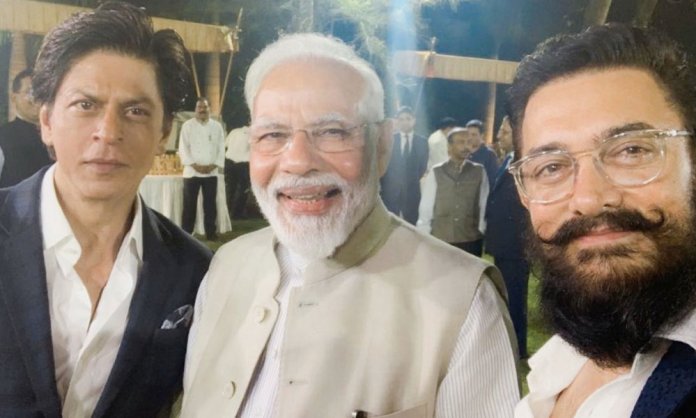 The superhit Khans of Bollywood, Aamir Khan, Shahrukh Khan along with several other notable figures from the Hindi film industry are currently being criticized for endorsing Prime Minister Narendra Modi’s latest drive.

The influential celebrities were seen socializing with Modi, taking selfies and supporting his newly launched project aimed at producing film and TV shows that popularise Mahatma Gandhi and his beliefs.

Aamir addressed the ceremony and said:

“It was a wonderful interaction we had with the Prime Minister today. He was very inspiring, very warm and very deep in what he had to say. I want to appreciate the PM for thinking about this effort. As creative people, there is much we can do, and I assure the PM that we will do even more.”

SRK too stressed that there is a need to come forward and make films on Gandhi that can help in the nation-building process.

Modi tweeted a video of Amir and Shah Rukh form the event and wrote:

It was a wonderful interaction, says @aamir_khan. A great way to involve everyone, says @iamsrk. Two top film personalities talk about the meeting with PM @narendramodi. Watch this one…

It was a wonderful interaction, says @aamir_khan.

A great way to involve everyone, says @iamsrk.

“Thank u @narendramodi for hosting us & having such an open discussion on #ChangeWithin & the role artistes can play in spreading awareness of the msgs of The Mahatma. Also the idea of a University of Cinema is extremely opportune,” wrote the King of Bollywood, SRK.

When every citizen works Dil Se, the outcome will be exceptional.

We will leave no stone unturned to carry forward the message of Bapu in letter and spirit. @iamsrk https://t.co/L0G38kKRvr

Since then, social media users have been displaying their outrage and displeasure over Bollywood celebrities openly supporting Modi, after his government imposed a lockdown in Occupied Kashmir while stripping it of its special status in August.

The Khans are not the first Indian celebrities to experience judgment for their endorsement of Narendra Modi.

you can search through the entirety of Bollywood and still not find a single spine https://t.co/9KadrgWYY5

If you are still with him, tell him that the Mahatma would share people's sorrows. Ask that he meet victims of PMC bank fraud and not just celebrities.

More than anyone else, it's Modiji that needs #ChangeWithinhttps://t.co/bXBKwGbIYZ

Don’t expect any better from SRK but Amir Khan, come on yaar, thori si sharam. I can understand silence but actively going and meeting and then declaring Modi ‘really deep’ and ‘inspiring’ at this point in time is a bit much.

But last heard, Aamir Khan had security concerns living in India, no? What changed? https://t.co/hZWicGb6kS

Veer should’ve been locked up in a Pakistani jail forever tbh https://t.co/7MqElclyu6

The same SRK and Aamir Khan who were abused and asked to go to Pakistan not too long ago have now become 'the pride of India' for the RW.

What are your thoughts? Comment and give us your feedback.