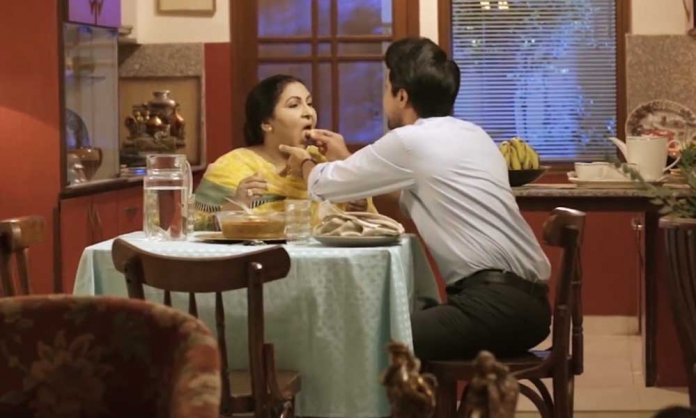 Advertisements communicate messages that market products in a number of ways. Some leave you craving for delicious food or a desire to purchase whereas others may get you emotionally invested from the first second.

Sensodyne, one of Pakistan’s renowned healthcare brands, has taken a new direction with an advertisement that will leave you in awe.

When we hear the name ‘Sensodyne’ we naturally recall adverts of dentists talking about sensitivity.

However, this time around, the brand took a different approach with the vision that out of everything in this world the most sensitive thing we have is relationships.

Whether that relationship is between a husband and a wife, mother and daughter, father and son etc., we all have ‘Hasaas Rishtay’ in our lives.

The ad starts off with a young man in his office. He gets a last-minute phone call from his boss and tells the person on the other side of the phone that he will be late, letting us assume he is updating his wife.

He then works throughout the night and makes it home. While passing the kitchen he realizes that the table has been set for him and that the food has still not been eaten.

He makes his way to the kitchen and says, “aray maa, ap toh kha leti” (Mother, you should have eaten) to which she replies with a plate of delicious food in her hands saying, “teri maa ke liye sub se refreshing time yehi toh hai” (for your mother, this is the most refreshing time of the day).

He then apologizes for being late, to which she tells him that there is no need for the apology and she does not get sensitive on such petty things. With a bit of humor thrown in, she jokingly adds “par teri hone wali biwi ka nahin pata” (but, I cannot say the same about your bride-to-be). Both start to laugh and are seen enjoying their dinner.

The campaign- Hasaas Rishtay tugs at heartstrings by showing the beautiful and sensitive moments between a mother and her son.

Sensodyne has built a connection with their consumers over these beautiful relationships, as everyone is working hard for another person, be it their parent, children, sibling or even their spouse.

Ali Yaqooti Senior Brand Manager @sensodyne_pk expresses a beautiful meaasage that we all have someone who we are willing to do anything and everything for. It can be your mother for whom you are working hard for day and night, a spouse who you want to help or your children for who you want to provide a beautiful life for. #HasaasRishtay is all about beautiful and sensitive bonds and moments we all share with someone. #sensodyne #talkingpoint #sensodynehasaasrishtay #floc #mothersday #relationships #sensitivity #brandsynario #pakistan

Hasaas Rishtay is a beautiful narration of everyday relationships one shares that help strengthen one’s bond and moments that are treasured.

There is also no forceful advertisement or business angle in the advert, just pure emotions because they define who we are as the importance of these bonds are embedded culturally in us since birth.

The brand also hammered the nail at the perfect time by launching the advert just before Mother’s Day, timing the entire situation just perfectly.

We cannot wait to see more alluring narrations around these relationships from Sensodyne in the upcoming days.