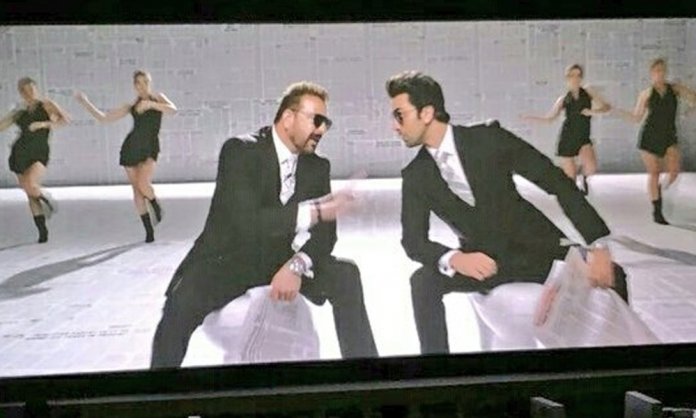 The most-awaited Bollywood movie of the year ‘Sanju’ is finally hitting the cinemas today worldwide.

The dramatic and controversial life of the Indian superstar is receiving an overwhelming amount of love from fans and celebrities alike.

However, in a shocking turn of events, Rajkumar Hirani’s film has leaked online!

Twitterati also claims that an HD print of the film has been leaked.

Just received the link of #SanjuLeaked .
You won't believe, it's in HD

Last time, I have gotten the link of #ManjhiTheMountainMan before 10 days of release.
That was also in HD

The following leaked scene from the movie is also making rounds on social media!

Video leaked from #Sanju screening. A bit of ARR song is also there, not Ruby Ruby. pic.twitter.com/g7cl5ghPqA

Reviews for Sanju have started pouring in and as expected, the biopic has blockbuster written all over it!

Amazing!!! official #SanjuTrailer
SUPERBBB……..Another masterpiece my Raju Hirani.
Incredible transformation and phenomenal acting by Ranbir Kapoor. The story will unfold all the sunshine and darkness of #Sanju’s life. Trailer only intensifies your curiosity for the film

Guys you won't believe but #Sanju is performing better than bahubali 2 at many locations. Word of mouth is extremely positive!! 10M Lifetime Possible.. If we talk about occupancy then it's 90%🔥 #RanbirKapoor all the best from our team!

Bollywood critics have given the movie a 10/10 rating!

Ranbir Kapoor… One actor… Multiple lives… Numerous awards… Ranbir’s act in #Sanju will win him accolades, admiration and awards… Deserves brownie points for getting into the skin of the character and living the part earnestly… A knockout, 10 on 10 performance!

Watching #Sanju…..Its interval…. Its Fantabulous….😃😃… Raju hirani is A gem…Ranbir is the best actor of this bollywood ….

With an ensemble cast of Ranbir, Sonam Kapoor, Paresh Rawal, Manisha Koirala, Vicky Kaushal, Anushka Sharma and Dia Mirza, Sanju will be unveiled to more than 5000 screens around the globe.

Iqra Aziz Finally Hits Back to Haters Over Her Viral Pictures!

Will you be watching Sanju? Let us know in the comments below.