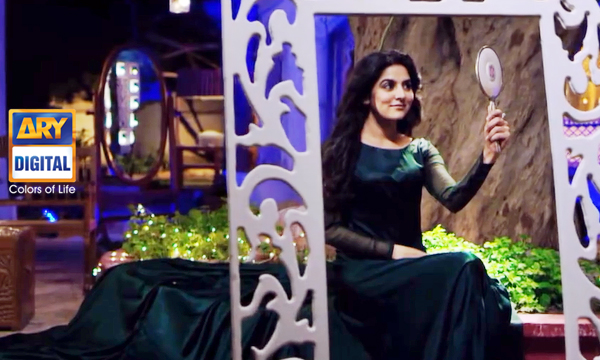 The pretty and popular, Sanam Baloch is making an acting back Teri Raza drama on ARY Digital! The morning show host has been ruling the airwaves with her program “The Morning Show with Sanam Baloch” on ARY News.

Her comeback drama has quite a stellar cast, which is directed by Aabis Raza and penned by  Naila Ansari. Baloch loved the script and just could not say no! Apparently, the plot will revolve around the story of a young girl, played by Sanam who marries a guy older than her, played by Sarmad Khoosat.

Their marriage will be quite a bumpy one! Shahroz Sabzwari will enter into the story and will most probably be harboring a soft corner for Sanam in the drama.

“This was such a different kind of script, I believe many girls out there can relate to it – I couldn’t refuse!”

Sanam Baloch looks like a vision in black in the promos of the drama. It shows her as bubbly, vibrant girl who is unhappy with her marriage to the much older, Sarmad Khoosat! Shahroz looks fierce in his role. Can’t wait to see the trio work their magic in the serial. Ali Sethi has worked his magic with his soulful voice in the OST of “Teri Raza”

The timings of Teri Raza drama will be revealed soon.

The Classy, The Ethereal, The Midas Touch! 👸🏻#sanambaloch #official #exclusive

Because bondings on set!!🎥#Repost @movieshoovy with @repostapp ・・・ Revealing the first look of highly anticipated comeback of Sanam Baloch with Sarmad Khoosat from the sets of Istikhaara. @sanamabaloch @khoosat @mustafafahad26 #sanambaloch

Trying to keep the selfie game 💪🏼 with this guy! @khoosat #sanambaloch #official #exclusive