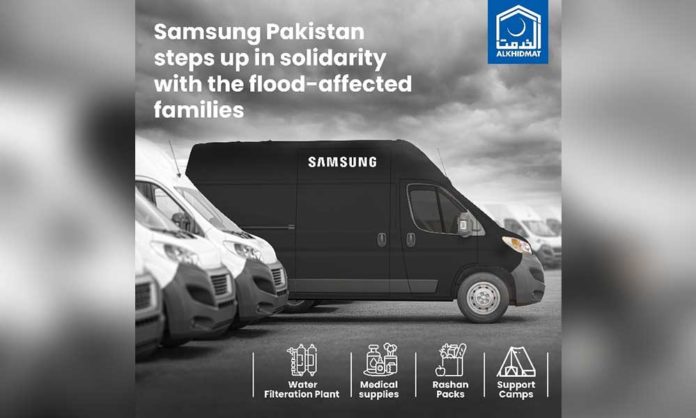 Samsung is supporting relief efforts to assist the people who have been affected by the catastrophic floods in the country.

The nation has suffered greatly due to the recent spell of torrential rains, especially in areas of Balochistan where hundreds of lives have been tragically lost and homes, businesses, and public facilities have been severely affected.

Samsung is guided by its long-standing principle of supporting humanitarian efforts and uplifting communities during times of crisis. Samsung came forward and partnered with Alkhidmat Foundation, which is one of the leading, non-profit organization, fully dedicated to humanitarian services since 1990. Alkhidmat workers and volunteers continue to work tirelessly for the relief of affected people across Pakistan and worldwide.

Samsung collaborated with ‘Alkhidmat Foundation’ by donating PKR 18 million and utilizing the amount in following manner:

Alkhidmat Foundation has dedicated emergency response teams that include Doctors, Supply Chain Managers, Drivers, Loaders & other general workers. WHO has also appreciated the Alkhidmat network for their tireless efforts in making things easier for the flood affected people in times of devastating flood crisis.

Samsung also intends to take multiple other actions to aid relief efforts in the flood-affected areas of Balochistan, Sindh, and South Punjab.