Just recently, Actor Shahroz Sabzwari tied the knot with supermodel Sadaf Kanwal. The couple announced on social media and were heavily bashed by the public.

Since then, the internet can’t stop discussing the duo. A social media user went into detail investigation and found out some shocking information. 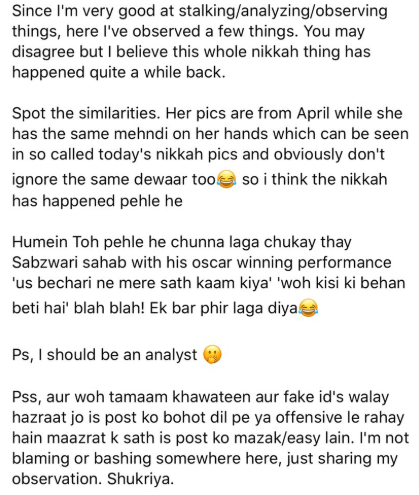 This is not it! Sadaf also posted pictures on her official Snapchat account and turns out the photos were taken a month ago.

All of this proves that the duo tied the knot a month ago, tightly when Syra announced she and Shahroz are separating.

What do you think? Let us know in the comment section below.

31st May 2020: It hasn’t been very long since actress Syra Yousuf and Shahroz Sabzwari parted ways after seven years of marriage. The couple called it quits after the news of Shahroze Sabzwari’s alleged affair with model Sadaf Kanwal took the social media by storm.

Model Sadaf Kanwal refused to admit that she was involved with Sabzwari and stated that they are ‘just friends.’

However, the model just changed her surname to Sadaf Sabzwari, proving that she has married the actor.

From cycling together to commenting on each other’s Instagram pictures – the two proved that they were an item on several occasions, but either of them refused to admit it.

According to Express Tribune, actor Behroze Sabzwari said, “it is nobody’s concern if they got married or not, this is our family’s matter.”

” Why do people think they have the right to any one’s personal life?” He added.

The actor also stated that many need to stop sharing news that doesn’t concern them.

“People need to stop maligning the name of someone’s daughter just because they have nothing to do,” the Tanhaiyaan star continued, adding, “Syra is our granddaughter’s mother, and she will continue to be our daughter.”

So, what’s your take on this?