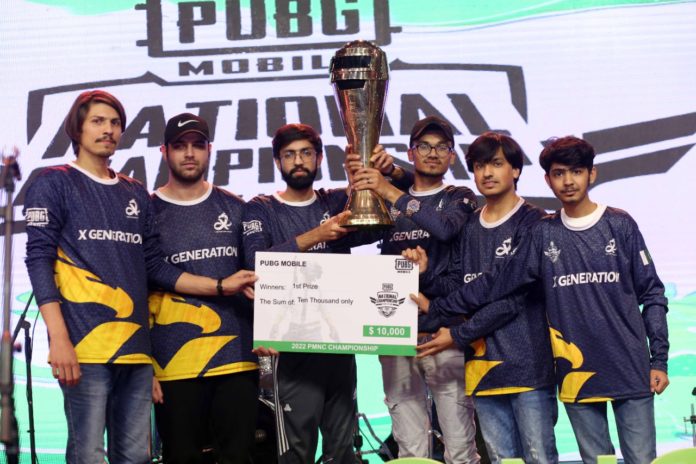 December 30, 2022, Lahore: The PMNC Grand Finale of PUBG MOBILE, the top gaming app in the nation, was held at the Lahore Expo Center. The month-long competition started with thousands of teams signing up and participating online; it was eventually reduced to 16 fortunate teams that defeated their rivals to qualify. The 16 finalists then engaged in combat in Lahore over the course of two days in an effort to win a combined prize of PKR 6.8 million and the title of 2022 national champions.

After two days of breathtaking action and 10 games, team X Generation took the lead with their power-packed game followed by the runner-up team 7EQR x Rage Esport which took home PKR1.3 million and 52 Esports as the second runner up team that took home PKR795 thousand.

This is the first time that PUBGM executed an onground tournament of this level for non-professional esports enthusiasts in Pakistan who want to showcase their repertoire of exceptional gaming skills and win a chance to play alongside professional esport athletes in the country. The gaming soiree was attended by the top pro-teams including Team Bablu and Team Star who played show-matches with local gaming influencers including the esports icon Arslan Ash, Star Anonymous, BABA OP and Crypto among others. This also gave the top teams a chance to witness their strong competitors in all their glory for the battles coming next year. To celebrate the young gamers in the country, Farhan Saeed graced the event with his energetic presence and proved to be a massive crowd-puller as the audience grooved to his vocals.

Speaking at the occasion, Khawar Naeem, Country Head-Pakistan at Tencent Games shared, “When it comes to talent, Pakistani athletes never stop to amaze you. PUBG MOBILE has been at the forefront of nurturing talent and PMNC 2022 was a chance for amateur talent to showcase their skills playing the nation’s favorite mobile Game. PUBG MOBILE is enabling young esports talent in finding their passion for gaming. The top teams from PMNC, PMPL and PMCO are now gearing up to play in the PMPL 2023 and I wish them good luck!”

The 16 teams that participated in the event are:

The biggest twist of the championship came when the previously demoted (from PMPL 2022) teams X Generation, 7EQR x Rage Esport, 52 Esports and Pyro Esports made their way to not just the top spots this season at PMNC but also secured themselves a ticket to 2023 PMPL Pakistan. Among the teams competing, 52 Esports was once the Champion team of PMPL Pakistan Spring, and was also the only team from Pakistan that qualified for PUBG MOBILE World Invitational. Last year, Team Bablu won the Champion title of PMNC Pakistan proving their mettle and building an audience for themselves.

The popularity of PUBG MOBILE Esports has seen rapid growth in the last 5 years. The gaming platform recently won an award for the Esports Mobile Game of the Year at the Esports Awards 2022 that were held in Las Vegas, Nevada.

The teams participating showed immense potential during the games proving the nation’s love for PUBGM. With PMNC, PUBGM Pakistan is fostering a new generation of young gamers by providing them with the needed resources and mentoring to help them take the gaming and esports industry in Pakistan to new frontiers.