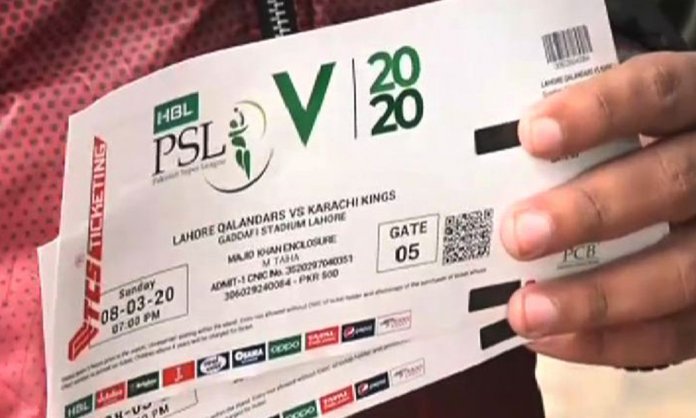 The hype over PSL is at its peak and the masses are eager to enjoy the event. Wondering where you can buy your tickets from?

All your cricket fans, grab your tickets as soon as you can! The first batch of tickets will be available for purchase through yayvo.com.

PCB reportedly aims at keeping the ticket prices at the minimum in a bid to attract a large audience. According to sources close to the PCB, the prices of the enclosures will range from Rs500 to Rs3,000.

The fifth edition of PSL is gearing up to entertain Pakistanis both within the country and overseas. Over 350 artists are expected to perform tonight including some of the most renowned local artists including Fawad Khan, Arif Lohar, and others.

Pakistan Super League 2020 is now the most anticipated event in Pakistan. However, we’re eager to learn about the host of the event. Can you guess who would that be?

People are rooting for Ali Zafar to host the event and for now, we’re just waiting for an official announcement!

The fever of PSL 5th Edition is on and people are desperately waiting to see their favorite champions to set the stadium on fire. From Karachi Kings to Lahore Qalandars and Peshawar Zalmi to Quetta Gladiators and Islamabad United to Multan Sultans  – all teams are top-notch.

30 days to go before this historic ground hosts the #HBLPSLV opening ceremony! Get your ticket now! https://tickets.yayvo.com/hbl-psl2020

In the previous four editions of Pakistan Super League, many world-renowned and hard-hitting players not only further elevated the standard of the event but also let the cricket viewers around the globe witness an exciting display of top-class cricket.

As the PSL fifth edition is approaching fast, the cricket fans in Pakistan are again eagerly be waiting for it to see some of the top players in international and domestic cricket playing before their eyes.