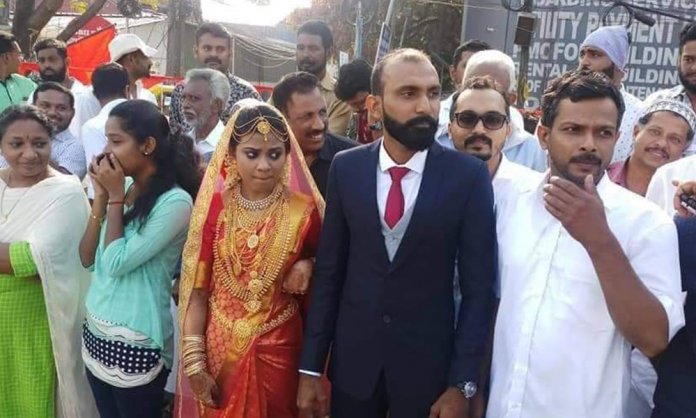 The rare sight occurred on Sunday when India marked its 71st Republic Day. However, there were also people who stood united with different political views.

NDTV reported, “The protest was organized by Kerala’s ruling Left Democratic Front (LDF), where millions of people – including chief minister and several newly-weds– lined up from Kasargod in the north of Kerala to Thiruvananthapuram in the south to register their protest against the new controversial move.”

Sangeetha Mohan, a Malayalam actress said, “I believe I am here because it’s my duty to stand up for other citizens who are being sidelined on the basis of caste, creed or religion. This is our India and I stand united with everyone against the Citizenship Amendment Act.”

Lakhs of people take to the streets of Kerala to form mega human chain against CAA. Kerala Chief Minister @vijayanpinarayi and other left leaders join the 620 km chain at various parts of the state.#ReporterDiary by @itsgopikrishnan
More videos: https://t.co/FAHzdk9TO8 pic.twitter.com/47dlEFPG95

India Today reported that Lakhs of people take to the streets of Kerala to form a mega human chain against the Citizenship Amendment Act (CAA).

What happens if the Citizenship Amendment Act is Passed?

A Citizenship Amendment Act was passed in December 2019 in India under which “citizens of six religions, Hindus, Sikhs, Christians, Buddhists, Jains and Persians who came to India by December 31, 2014, from Pakistan, Afghanistan, and Bangladesh will be granted citizenship.”

Under the aforementioned law, Muslims coming from all three (Pakistan, Afghanistan, and Bangladesh) countries will not be granted citizenship.

Not a chain, but an ocean. People from all the walks of life joined #KeralaHumanChain pic.twitter.com/LbtUxS3zRQ

“We are not here for politics. It’s not about the party. We will live and die here in India,” says Muslim woman in Hijab present at the protest.

Someone at the protest added, “they (the government) are trying to scare us. We are all Indians, we are all humans. That’s why we have joined the human chain”.