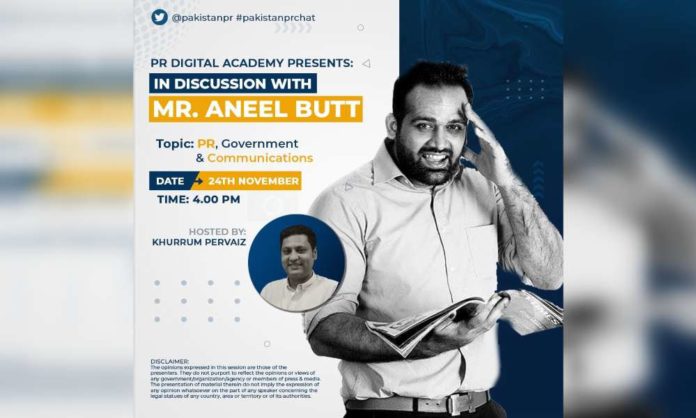 This article is written by Safia Fazeelat

In a recent virtual session held by the PR Digital Academy in Pakistan, multiple PR agency leaders, executives and students pursuing advanced communications degrees took part in a talk about the fundamentals of PR in a government environment. Hosted by Khurrum Pervaiz, one of the key founding members of the PR Digital Academy, the conversation featured Mr. Aneel Butt, Public Relations Officer for the Ministry of Commerce and focused on the government’s communications strategy and current challenges.

Some key learnings from the talk include the fact that the concept of setting up public relations for government communications is not new but is changing very rapidly in Pakistan. With the advancement of technology and the rampant use of social media, government is actively engaging these resources to communicate, send out key messages, clarify misconceptions, and also attempt to mitigate PR crises. It was revealed that the Government of Pakistan now has a well-defined structure developed to uplift and facilitate the communications system within the government and also develop its capacity. Information, on the other hand, is being disseminated from multiple sources that include the Information Ministry, the Press Information Department, and the Associated Press of Pakistan.

In terms of challenges, a few were highlighted by the speaker  related to what hinders effective communication from the authorities down to the masses. This includes the risk of misinformation in the country, where fake news and statistics are easily spread around through social media. There is seemingly a disconnect between local news bureaus and government spokespersons, and in certain cases, the capacity for journalists and beat reporters is also limited. They would like to instead foster better relations with the media and ensure that correct and factual information is shared at all times. Furthermore, there do exist some internal challenges as well that can sometimes damage government communications, like government officials breaching contracts and revealing confidential information.

An important takeaway from the discussion has been a revelation that within the field of public relations, the possibility of public-private partnerships can and should be explored, to encourage private agencies to lend out their expertise and help support government communications.

The PR Digital Academy is a group consisting of more than 250 public relations professionals from Pakistan and international communities and has been playing its role as a significant platform to bring together and cultivate the communications ecosystem in Pakistan. This virtual series of conversations is a brainchild of Khurrum Pervaiz, and will target to create a learning environment for the PR industry in Pakistan.