According to several sources, the investigation report has held the pilot and the air traffic controller responsible for the tragic plane crash of PK-8303.

The investigators claimed that “the pilot did not follow the procedure and was overconfident.” Alongside the pilot, the air traffic controller was also held equally responsible for the tragic incident.

Apparently, from the data collected from plane debris, recorded data from the cockpit voice recorder, and other evidence included, it is said that the air traffic controller did not ask the pilot to make an emergency landing instead of taking off when the aircraft hit the runway.

Air Commodore Muhammad Usman Ghani, who is leading Aircraft Accident and Investigation Board (AAIB), has submitted the preliminary report on the plane crash to Federal Aviation Minister, Ghulam Sarwar Khan.

The minister will be presenting the preliminary report to Prime Minister Imran Khan tomorrow.

On May 22, the ill-fated PIA plane crashed in Karachi, carrying 97 passengers. According to a recent report issued on Tuesday by CAA, the pilot had violated the landing protocol.

Moreover, experts say that the pilots made a first landing attempt, and the plane briefly touched the ground multiple times, before attempting to land for a second time. They also said that the pilots likely tried to land the Airbus without lowering the wheels, which damaged both the engines.

According to the report, the pilot violated air traffic control’s (ATC) direction to lower the altitude before landing.

The additional director of flight operations has stated in his letter to the general manager (safety) that the plane’s altitude and speed were higher than the required limit for landing. The ATC had warned the pilot twice, but he disregarded the warning, the report suggested.

May 29, 2020: As reported by The News, Pakistan International Airline‘s (PIA) spokesperson announced that illegal currency was being smuggled by someone present in the plane crash on May 22.

Airbus A320 crashed in Model Colony near the Jinnah International Airport, killing 97 passengers onboard while only two passengers survived.

“Local and foreign currency worth millions of rupees was recovered from the crash site,” said the spokesperson.

“A total of Rs30 million were recovered from three separate bags,” he added.

Such a vast amount can’t be transported without prior permission from the airline. Extra seat is required to be purchased in case passenger is permitted to travel with the amount. For such large amounts, the passenger has to be seated next to the cash.

“A passenger cannot carry it in their luggage or cabin baggage. No passenger had brought an extra seat.” Reportedly, three people have come forward to claim the money.

May 22, 2020: An unfortunate incident has taken place today as a Pakistan International Airline aircraft has crashed in a residential area in Karachi.

Reportedly, the aircraft, Airbus A320 crashed in Model Colony near the Jinnah International Airport.

PIA spokesperson Abdul Sattar confirmed the news of the crash and further added that the plane was carrying 90 individuals along with eight crew members.

Reason Behind the Crash

As per the pilot’s conversation with the radio tower, the reason for the crash was a result of sudden engine failure. 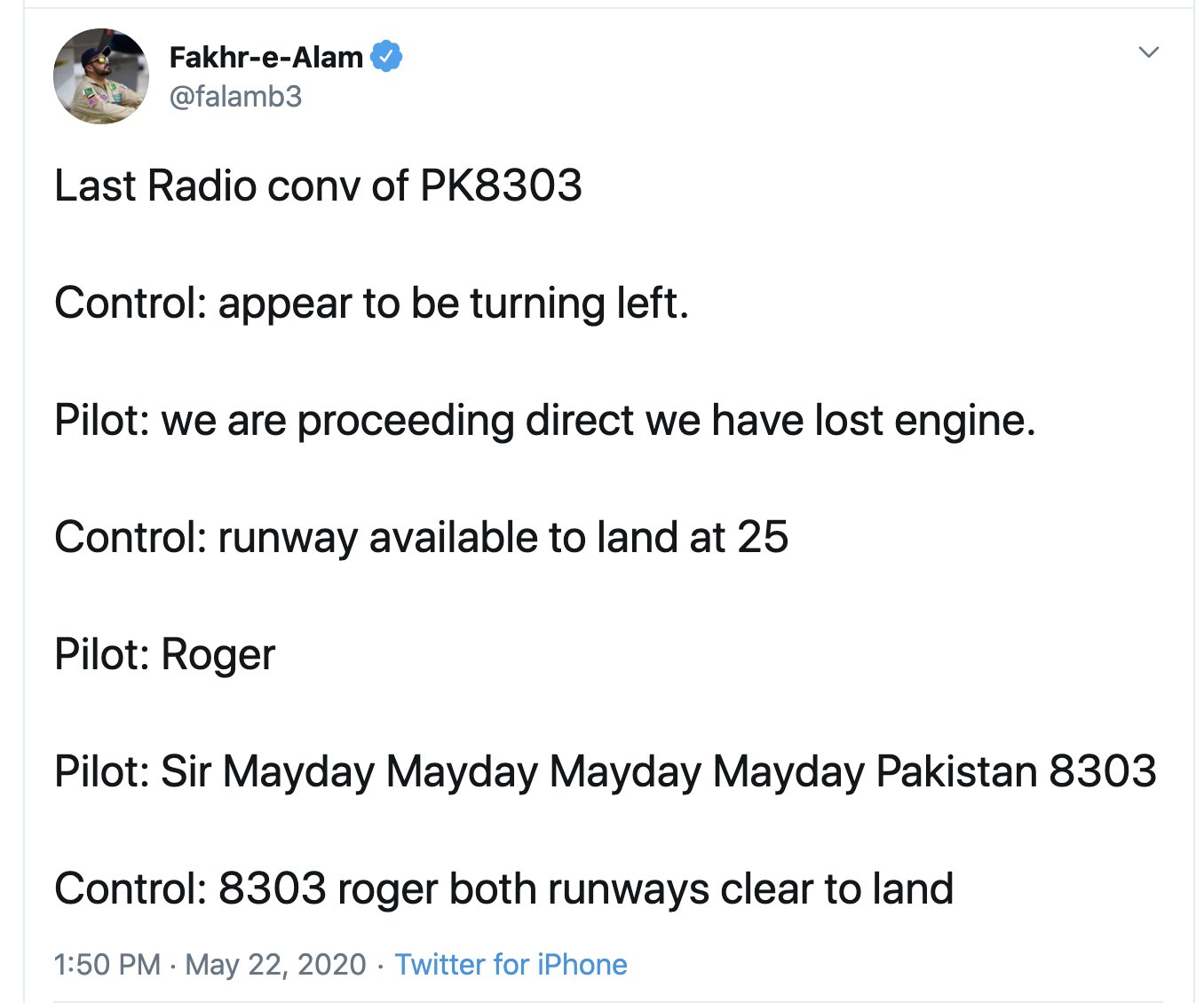 Mayday is an international radio distress signal used by ships and aircraft when they are in trouble.

The flight took off from Lahore to Karachi. A statement issued by Inter-Services Public Relations (ISPR) said Army Quick Reaction Force and Sindh Pakistan Rangers reached the site for relief and rescue efforts.

On the other hand, the Minister of Health & Population Welfare has declared an emergency in all major hospitals of Karachi.

The following images and footages are of the crash scene.

Breaking News: A passenger plane of Pakistan International Airlines (PIA) crashes near Karachi airport. The flight, A-320, was carrying 90 passengers and was flying from Lahore to Karachi.#planecrash pic.twitter.com/biq7D23c9p

PIA plane crashes on top of houses in Karachi. 98 feared dead. Place had flown from Lahore airport and was about to land at Karachi airport. #planecrash pic.twitter.com/0sQvtCuaDU

PIA’s Lahore-Karachi flight PK-8303 crashed on a residential area near Karachi airport a short while ago. Fire fighters trying to control fire in an affected house👇🏼 🔥 ✈️ #planecrash #BREAKING pic.twitter.com/LEg1roPjol

The following are the names of those who were on board the flight. Names of survivors are yet to be shared.

Note: This is a developing story. We will be updating this space as more news about the crash rolls in.