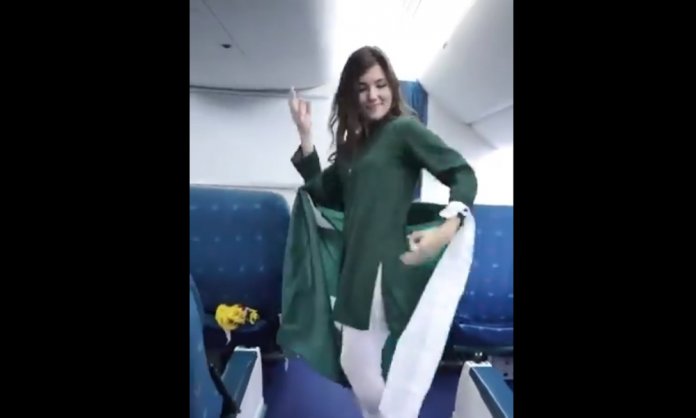 Kiki Challenge has taken over the social media by storm. People of all ages from all over the world have been posting their Kiki Challenge videos on the internet and most of them have gone viral.

Unfortunately, it is still hard for people at times to take something light-hearted and fun on a good note. Similar happened with Eva Zu Beck, a foreigner who was traveling to Karachi via Pakistan International Airlines while touring Pakistan.

Dressed in a green kurta shalwar, wearing Pakistan’s national flag, the foreigner performed KiKi challenge inside and outside the plane, in an attempt to promote Pakistan’s tourism.

A woman does kiki challenge stunt on the PIA aircraft and the tarmac. Wearing green and white dress and draping the Pakistan’s national flag around her body, she is seen dancing on the aisles of the aircraft and then on the tarmac.@Official_PIA @pid_gov #PIA #KikiChallenge pic.twitter.com/kvlMbfolui

While the video has received a lot of media attention in the past few hours,  there are people who are supporting Eva and there are others who are not considering that her dance is a disrespect to the Pakistani flag.

A day before Independence day, PIA announced that Eva from Poland will be celebrating Independence Day in style never before attempted in the world.

Eva zu Beck from Poland/England is a Global Citizen travelling around the world, but now her heart is set on Pakistan! She has been exploring Pakistan flying #PIA. She will be celebrating Independence Day in a style never before attempted in the world! Stay tuned for updates. pic.twitter.com/jrwezOJBzw

Soon after the picture was published on PIA’s official Twitter account, NAB took notice of the of the attempt.

According to reports, NAB has taken notice of the ‘insult’ of the national flag and has sent the notice to PIA’s COO to explain his position.

I don’t think it’s any disgrace of the national flag in a video by blogger Eva zu Beck on a PIA plane. Please be positive! #KiKiChallenge
#IndependenceDay

Following the backlash, the foreigner has posted her stance on the entire situation.

In times, where Pakistan is in dire need to promote its tourism, do you think this is something that should’ve happened to a foreigner who was only attempting to promote Pakistan’s tourism and its culture?

The fact that this has happened during the Independence Day celebrations of Pakistan, doubles the irony of the situation.

This is a developing story, for more stay tuned to Brandsynario.