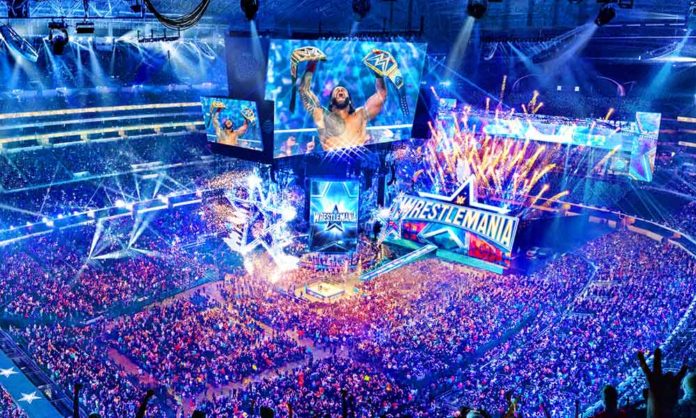 BREAKING NEWS: @LFFStadium in Philadelphia will host @WrestleMania 40, on Saturday, April 6 and Sunday, April 7, 2024, as first reported by @PhillyInquirer and @SBJ.https://t.co/UNpWPeh8aF pic.twitter.com/oHrX8bk9uz

Wells Fargo Center hosted WrestleMania indoors, however, since then, WWE has moved away from arenas and into large stadiums for their marquee events. So, while WrestleMania XV had a claimed attendance of around 20,000, WrestleMania 40 is expected to be over 80,000.

“On behalf of WWE, we are thrilled to bring WrestleMania back to the City of Brotherly Love,” WWE executive vice president of special events John Saboor said in the official press release.  “We thank all of our local partners who were integral in making this long-awaited return a reality.”

Philadelphia Mayor Jim Kenney said in a news release, “We are proud to welcome WWE fans from around the world to Philadelphia to be a part of the historic 40th WrestleMania in 2024,” He further added, “The week-long series of events will help put a global spotlight on our great city while also generating a major impact for our local economy.”

WWE experimented with a two-night WrestleMania event in 2020, during the COVID-19 pandemic. The event was held in the WWE Performance Center in Orlando with no fans in attendance, but it was a success considering PPV buys. So, WWE stuck with the same approach even after things came back to normal.

WrestleMania 38 in 2022 saw the return of full capacity crowd at WrestleMania since COVID-19. It took place at AT&T Stadium in Arlington, Texas, and had a combined attendance of 156,352; during Night One (77,899) and Night Two (78,453). WrestleMania 39 is scheduled to take place at SoFi Stadium in Inglewood, California next year.

Philadelphia will host the whole extravaganza of WrestleMania week, including the 2024 WWE Hall of Fame ceremony at the Wells Fargo Center, as well as the WWE’s weekly television shows, Friday Night SmackDown and Monday Night Raw.