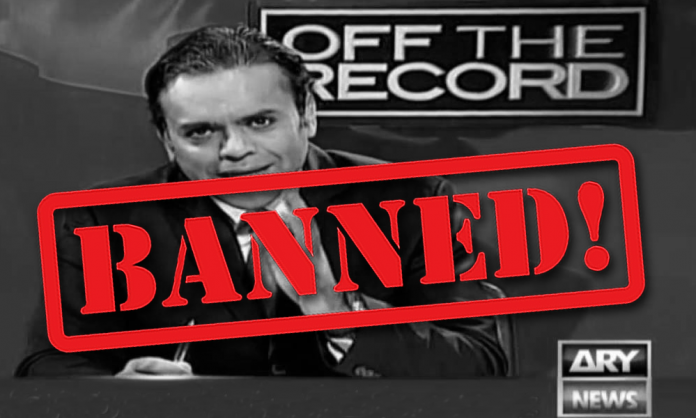 Pakistan Electronic Media Regulatory Authority (PEMRA) has issued an official notice to ARY News in which they have banned the show ‘Off The Record’ hosted by Kashif Abbas for 60 days.

The reason behind the banning of the show is an episode which was aired in which Pakistan Tehreek-i-Insaf (PTI) minister Faisal Vawda brought a boot to pull a stunt.

Vawda used a boot to heap scorn on the PPP and PML-N for voting in favor of the recently passed Army Act in parliament.

Politicians and leaders took it to social media and other channels to express their anger and concerns over this action. Even Vawda said that Prime Minister Imran Khan was “not happy” over his action.

Although he took responsibility, he told GEO TV anchor Hamid Mir that he will not apologize for it.

Meanwhile, PEMRA has issued the ban on the show for airing the episode. The notice reads that one of the panelists performed a “very unethical act“.

“Subsequently, arguments made by Mr. Vawda were not only extremely frivolous and derogatory but also an attempt to debase a state institution,” the notification dated Jan 15 read.

“Whereas, the role of programme host Mr. Kashif Abbasi was quite unprofessional who actually did not intervene or stopped (sic) that unethical act performed by one of the panelists during a live show rather took the entire incident casually and kept smiling/cherishing such occurrence,” it continued.

PEMRA Bans programme ” OFF THE RECORD” on ARY News for 60 days. pic.twitter.com/TuknaIlzWn

According to Pemra, Abbasi cannot conduct his show, appear on ARY News or any other television channel as a guest/analyst or expert for 60 days.