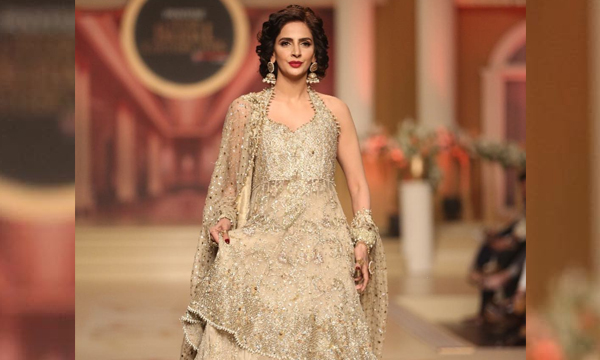 Pakistan fashion industry is emerging with the speed of light and the country’s numero uno general entertainment network, HUM Network Ltd. has been playing an important role in pushing fashion forward in Pakistan.

HUM Network presented the 15th Edition of Pantene Bridal Couture Week, providing a platform for bringing the established and emerging couture designers of the country by rolling out the glamorous red carpet and runway.

The country’s biggest and most sought-after three-day bridal fashion extravaganza, Pantene HUM Bridal Couture Week 2017 commenced here in the Mughal City of Gardens on December 8, 2017, presenting the latest and the best of Pakistani bridal trends by leading and burgeoning fashion designers on the catwalk. This year, the bridal extravaganza is styled by the renowned stylist Nabila and is choreographed by Vaneeza Ahmed Ali.

Show one of the bridal extravaganza kicked off with the classic collection of Fahad Hussayn’s ARTH Novelty Couture 17/18, followed by Mifrah’s collection inspired by the rich traditions, essence, cultures and heritage. Humayun Alamgir was the third to present his collection Poshak on the runway which was followed by Je Suis Belle by Reema Ahsan. Show one concluded with Aisha Imran’s Jahan Ara. Show 2 of PHBCW started with Faris by Ziggi Menswear, which was followed by MNR Design Studio’s Gulab Sandesh. Designer duo Deepak N Fahad was next to present their collection Shahtaabi on the Catwalk. Day 1 of three-day bridal extravaganza concluded with a bang in a special segment Classic 15, where the country’s top 15 couturiers presented a specially designed outfit each, including HSY, Karma, Elan, Saniya Maskatiya, House of Amir Adnan, Nida Azwer, Rana Noman, The House of Kamiar Rokni, Mahgul, Shamsha Hashwani, Nilofer Shahid, Farah Talib Aziz, Mehdi, Republic by Omar Farooq and Honey Waqar.

PHBCW, famous for adding allure to the runway with an illustrious list of showstoppers, had a star-studded line-up and power-packed performances on the first day; film star Shaan Shahid, Uzma Hassan and Mohib Mirza opened the show for Fahad Hussayn while Bilal Abbas walked the ramp for Humayun Alamgir with a special performance by Wali Hamid Khan. The charming Ahmed Ali and Mahen ur Hader show-stopped for Aisha Imran, whereas the stunning Sajal Aly and Aima Baig added allure to MNR’s collection. Dance maestro Wahab Shah added an extra flavor to the bridal drama with his impeccable Pantene segment performance, where the singing sensation Zoe Viccaji raised the entertainment quotient of the show with her upbeat performance. Last but not the least, the rising singer and actor Haroon Shahid performed in the Classic 15 segment.

Day 2 of the country’s largest bridal extravaganza PHBCW was the continuation of the glamour and ethnic bridal collections, which were samples of excellence. HUM Network Ltd. pulled off Day 2 of 15th Edition of Pantene HUM Bridal Couture Week with most of the country’s acclaimed couturiers, bridal wear designers and retail brands, promoting the finer art of classic couture. With celebrities in full attendance masquerading the red carpet and runway, an affair of wedding wears for Pakistan, Day – 2 was with the detailing of motifs on the catwalk.

Show one of the second day of PHBCW started with the heavily crafted bridal/formal collection of Amina Yasmeen by Mansoor Akram, followed by Aneesa Kiani’s Raa-e-Ishq: 3 Stages of Love, in a special segment Strong is Beautiful. Her collection was inspired by The Kiani Crown which was the traditional coronation crown embellished with Iranian crown jewels. Retail brand Edenrobe presented their collection True Inspiration on the runway which was followed by Crystalline by Aisha Farid. Show one of PHBCW concluded with Erum Khan’s Sahiba Bridal Collection Winter’17, representing the aura of a woman who is an amalgam of delicacy and flattering strength. Show 2 of PHBCW day 2 started with Chinyere’s Thumri, which was followed by Demesne Couture’s Escape de Vivre 2017. Retail brand Royal Tag was next to present their collection Modern Man on the Catwalk. Day 2 of the three-day bridal extravaganza concluded with Lajwanti’s Sultana, a collection inspired by the grandeur of the Ottoman Empire.

Day 2 of PHBCW also had a star-studded line-up; the gorgeous Uzma Khan and singing sensation Asim Azhar opened the show for Amina Yasmeen by Mansoor Akram, while the talented Ahsan Khan who is set to woo everyone with his incredible performance in the upcoming comedy thriller Chupan Chupai, walked the ramp for Edenrobe. The rising stars Iqra Aziz, Yumna Zaidi, Zara Noor Abbas, Asad Siddiqui, Sami Khan and Affan Waheed show-stopped for Aisha Farid. The charming Minal Khan show-stopped for Erum Khan, whereas the stunning Aiman Khan added allure to Chinyere’s collection. Nimra Khan graced the runway for Demesne and the couture king HSY show-stopped for Royal Tag. Last but not least, the gorgeous and uber talented Mawra Hocane concluded the day for Lajwanti.

Pantene HUM Bridal Couture Week 2017 is choreographed by Vaneeza Ahmed Ali, with backstage management by Muneera & Aamir of Production 021. Make up and styling is by N-Pro and N-Gents. All public relations operations and media liaison is carried out by the in-house PR team of HUM Network Limited along with show production and execution by the special projects and events team at HUM Network Limited. Jewellery partner for PHBCW is Hamna Aamir.