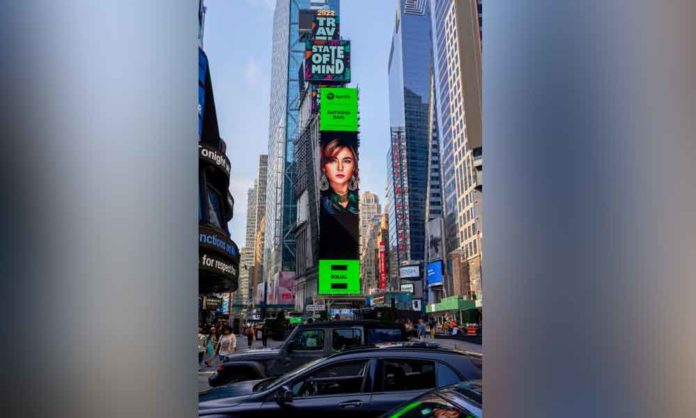 Karachi, July 22, 2022 – Spotify’s journey to highlight female artists that are revolutionizing the industry continues with the announcement of EQUAL Pakistan’s Ambassador for the month of July, Natasha Baig. The Sufi-rock sensation whose tracks have been featured from mainstream movies to Coke Studio has put a new twist to the genre making it her own through strong vocals and an edgy style that can put listeners in a state of trance. Since her debut in 2013, Natasha has made a mark on the industry through versatility of her vocals earning her the title of the fifth ambassador for EQUAL and like the honoraries before her, she was featured on a digital billboard on Times Square NYC.

As EQUAL Pakistan enters its fifth month, it has become the place for women artists of all genres and career stages to celebrate their voices. After the likes of Arooj Aftab, Mehak Ali, Hadiqa Kiani and Zoha Zuberi, Natasha Baig has become the program’s latest Ambassador. Over the course of her illustrious career, Natasha has a long list of accomplishments to her name.

Natasha recently released her sophomore album titled Khirad with 9 tracks which is a tribute to the legendary poet Allama Iqbal. The album was introduced with a vision to take Allama Iqbal’s thoughts to the new generation carrying an objective for them to stay attached to the cultural roots of the nation. A much-loved track from the album, ‘Jahil Hoon Main’ is featured on EQUAL Pakistan’s playlist and EQUAL Global, bringing Natasha closer to a global audience.

Commenting on being EQUAL’s Ambassador of the month, Nastasha said: “I think it’s an amazing opportunity for an artist from Pakistan because it’s a way to connect globally. It means a lot to me because being the first girl from Hunza who managed to create her own space in the mainstream music scene of Pakistan was already a huge milestone for me and now Spotify’s EQUAL Artist campaign is enabling me to dream even bigger.”