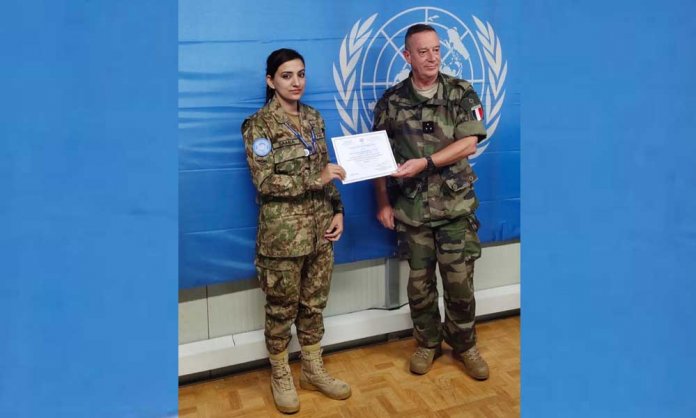 Pride of Pakistan, Major Saima Rehman is awarded the highest certification from the UN for her remarkable services in peacekeeping missions at the UN.

This is the first time any of the Pakistani females has been awarded an SRSG Certificate in the line of duty. Major Saima Rehman is recognized for her exemplary performance in the Mission level studies, analysis and a number of other valuable contributions for UN Peacekeeping.

She was nominated for the UN special representative for the Secretary-General certification of the year.

It’s a moment of utmost pride how she is the only Pakistani female to receive the highest level of recognization. Also, she is referred as a beacon of light for others.

@UNPeacekeeping She is the first female peacekeeper of Pakistan Army who received this highest level of recognition. Her conduct and professionalism is a guiding beacon to all the women across the MONUSCO.

Pakistan has been a part of UN Peacekeeping forces for a long time and now a huge number of females are inducted in the force. Pakistan’s UN Ambassador Maleeha Lodhi also shared the progress of Pakistani Female participation in the Peacekeeping force and how the number is gradually increasing.

As Pakistan increases women’s participation in its contribution to UN Peacekeeping, for the first time a female engagement team was deployed in July 2019 in the Democratic Republic of Congo. The team of 20 officers came from diff arms & services-1 pic.twitter.com/xfdgw6CQG5

Women are going places and winning recognization in every field. This is a glorious moment for not just Major Saima Rehman but for the whole nation. In March this year, another Pakistani Peacekeeper was awarded the UN Medal of Posthumously for his services and giving his life in the line of duty. Naik Muhammad Naeem Raza was serving with the UN Organization Stabilization Mission in the Democratic Republic of Congo.

What are your thoughts about this news? Share your views in the comments below.

Stay tuned to Brandsynario for all the latest updates.