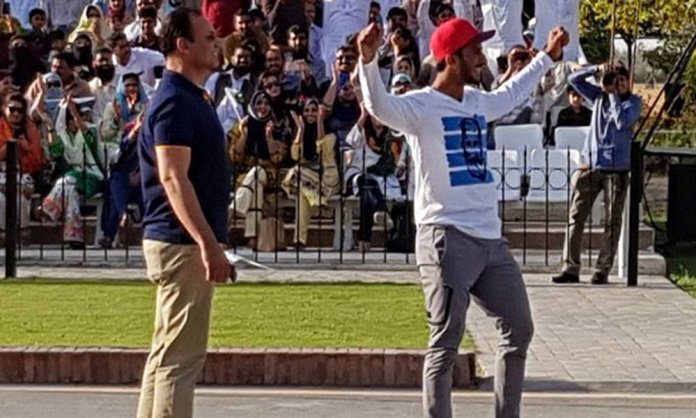 We all love Hassan Ali for his performance on the field, however, this time around, the young Pakistani fast bowler is under fire for a stunt he pulled at Wagah Border which has ignited fumes within the Indian Army.

Ali walked up to the gate during the ceremony and displayed his signature move, which he usually does after taking wickets. Despite getting a cheerful response from his supporters on his side of the border, the other side felt like someone had punched them in the gut.

However, many Pakistanis have also spoken against his action saying it was a childish thing to do for someone like Hassan Ali at Wagah Border where countries and the army is involved.

Pakistani cricketer Hasan Ali’s latest stunt at Wagah-Attari border just reiterates that this beating retreat is hateful and should be done away with. India and Pakistan have enough jingoism as it is. pic.twitter.com/XVTLvO3LR2

Sports style should not demonstrate on the borders. In my personal views, Hassan Ali should not have done that in this sensitive area. What if Virat Kohli or Rohit Sharma does that against us on the same border? Let’s remain the cricket as sports instead of war.

If u people remember moka moka at wahga border from indian side then u should not criticise hassan ali …being Pakistani am happy i support hassan ali…indians can do whatever they want and we can’t?

1/3
FOR INSULT & CRIMINAL PROVOCATION OF CRICKETER HASSAN ALI
AT WAGA BORDER TOWARDS INDIAN CRICKET LOVING PEOPLE
& ITS IRRESPONSIBLE SUPPORT BY CPT. SRFRAZ MUST BE PUNISHED.

SUCH HARAMI-HARAMZADAS MUST BE JAILED FOR INDECENT ACTS TO
INFLAME HOSTILITIES IN KASHMIR https://t.co/VLqavTgwrL

ON ONE HAND YOU WANT TO PLAY CRICKET WITH INDIA & ON THE OTHER HAND YOU INSULT CRICKET-LOVING INDIA WITH YOUR
GOONDA PROVOCATION.

Hassan Ali can only do this behind the line, because once he crosses the line, it will be a no-ball and there will be a “free-hit”.

Has the army weakened that now they are planting the players? #HassanAli #Afridi Nincompoops! https://t.co/TYcVLUPWwv

Fakhar Zaman instead of Sami Aslam and Rabat ali instead of Hassan Ali. This is my team. Fakhar Zaman will help to add some valuable quick runs in tough batting conditions.

Parade at wagha border is for entertainment of the crowd of both sides if Hassan Ali did his celebration to cheer up the crowd whats the big deal, why cant the crybabies across the border digest it.

Should Hassan Ali have done this stunt a sportsman? What do you think?