Pakistani doctors, nurses and other medical staff who are the frontline soldiers in the ongoing war against the deadly coronavirus in the country, have been exposed to the virus threat because protective masks and body gear is not available for them.

A shortage resulted after the general public started panic buying masks when the number of people getting infected by COVID-19 escalated. Prices for these protective masks also increased exponentially. The doctors treating patients infected with Corona have been doing it with minimal protective gear and in some cases mishaps have occurred creating greater risks for them for coming in to work.

One Pakistani man decides to take matters into his own hand – Starts Mass Producing Masks and Protective Gear for Medical Community!

Amidst mask hoarders and people trying to take advantage of this critical situation by charging way more than the actual price, there comes in a good samaritan, Umer Hussain, who has taken it upon himself to make affordable protective gear for doctors, nurses and paramedics. It definitely was the need of the hour and kudos to him for taking up such a great initiative.

Instead of helping them in a monetary way or sending out food to thank them, Umer Hussain thought of acquiring masks and protective suits for the medical community however he came to know that they are being sold at very expensive rates and are scarce from the markets. What he did next was amazing!

Turning his living room into a make-shift factory, the owner of Sweettooth took it upon himself to mass-produce the protective gear needed by doctors and other medical staff. He explains his detailed plan in a Facebook post he shared. He says that the suit cost him only Rs.82 for the fabric and he believes he would be able to manufacture it in under Rs.100 only. Whereas, there are sellers charging Rs. 2500 for the same type of protective suits.

Umer has also asked people to provide numbers of tailors who would be able to assist him in getting this task done! 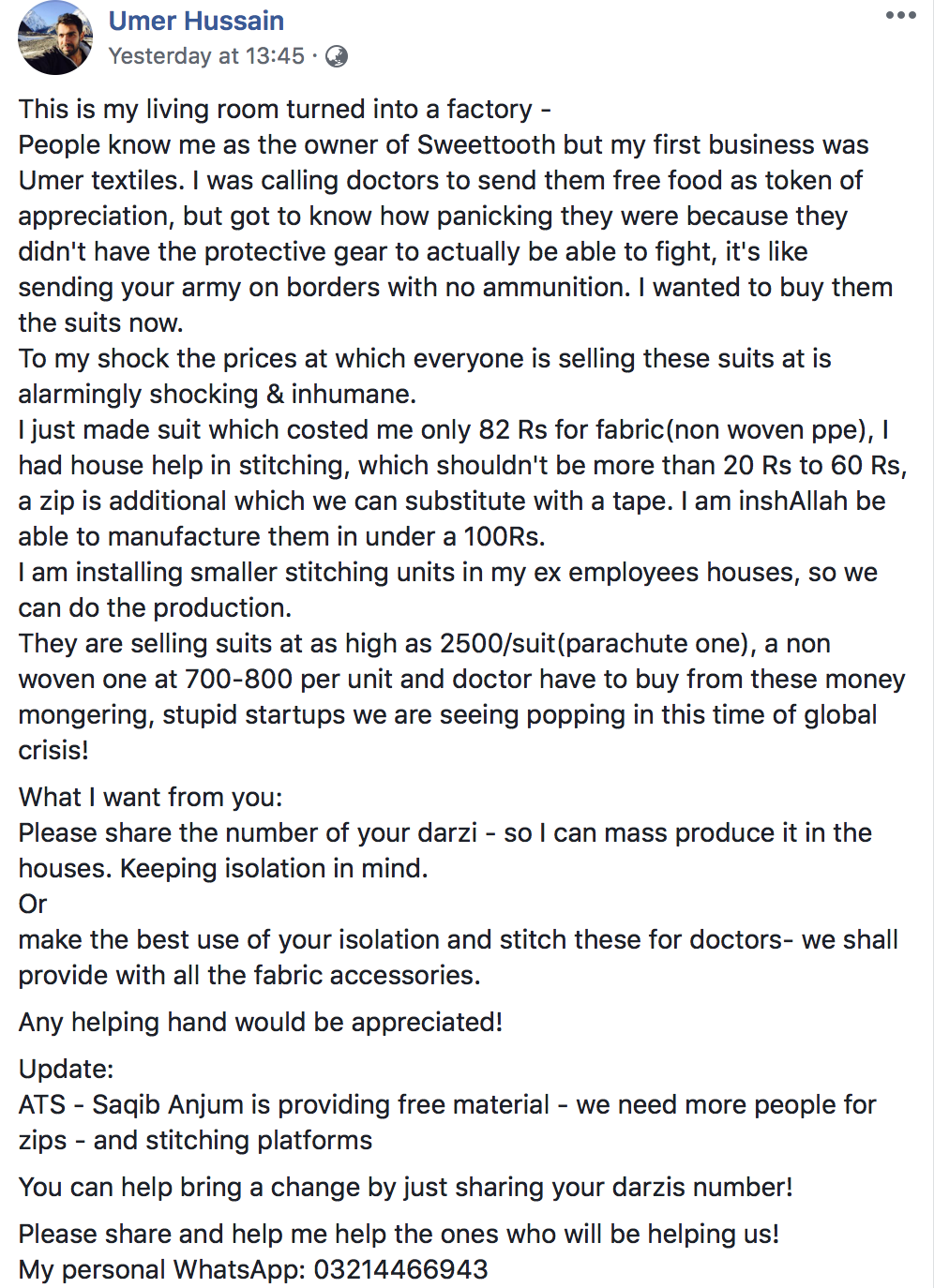 He has also asked people to help as much as possible for this noble cause.

Not only is he working towards this cause but he has also decided to send out rations to the people who need it the most during these troubling times by involving the society in this job as well.

“In these times we need to act as a society and take care of people around us-
We will be placing chillers outside each Sweettooth- so you can drop and they can pickup up! – Sealing it off and distributing maintaining a safe distance!”

In this tough time – the ghareeb are going to suffer the most ! If virus doesn’t kill hunger will! All our Sweettooth will serve as pickup and drop off point for free food for people who can not afford or have lost their jobs. Anyone who wants to donate food from home can drop off and place at chillers placed outside each Sweettooth – so we can distribute ensuring food to people around us! Anyone who will donate even a piece of bread is entitled to a flat 50% off on any food he/she orders at Sweettooth whenever! In these times we need to act as a society and take care of people around us- We will be placing chillers outside each Sweettooth- so you can drop and they can pickup up! – Sealing it off and distributing maintaining a safe distance! Effective immediately -starting from All our locations in Lahore uptil Hunza ! Food is the least we can do ! May God help us through this- InshAllah! Sweettooth MM Alam Sweettooth DHA T block Sweettooth Heera Mandi Sweettooth Phase 6 Sweettooth Murree expressway Sweettooth Mushkpuri Sweettooth Attabad lake Sweettooth Karimabad Hunza Together we can 🙏🧡 #covid19 #epedemic #sweettooth #spreadlove #humanity #onenation @sweettoothpakistan