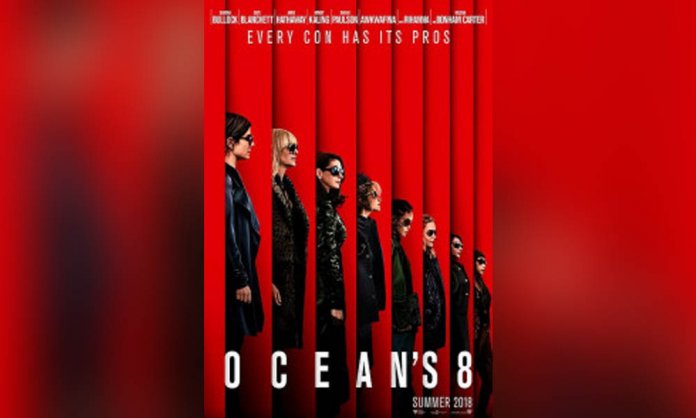 They’re eight women, poised to take over from the men for an “Ocean’s” reboot full of glitz and glamor — a particularly #MeToo affair that does away with the saga’s traditional masculinity.

“Ocean’s 8” is to be released Friday, more than 10 years after “Ocean’s 13,” the third volume following the escapades of Danny Ocean (George Clooney) and his casino-robbing gang.

But to freshen up the latest instalment, Warner Bros bid farewell to Danny — killed in 2018 in unknown circumstances — and replaced him with his sister Debbie (Sandra Bullock), who, like her brother at the beginning of the saga, has just been released from prison.

Meanwhile, there’s another change of scenery. Rather than casinos, Debbie’s focus is one of the most extravagant events in New York’s calendar: the Met Gala.

It’s at this party — organized by Vogue editor Anna Wintour — that Debbie wants to get her hands on a $150 million Cartier necklace.

In preparation, she’s gathered an expert team — all women, of course, echoing the likes of “Set It Off” (1996).

But “Ocean’s 8” does away with testosterone, darkness and dramatic tension — elements synonymous with the crime genre and prominent in the first three “Ocean’s” films.

There are no guns, bombs or physical violence. No enemy opposition, such as Terry Benedict (Andy Garcia) in the first three films, either. Once that’s all stripped away, all that remains is planning the heist and its precise execution.

And while historically, female gangs have often been portrayed as clumsy or inexperienced, “Ocean’s 8” presents Debbie and her accomplices as a diverse force to be reckoned with — with skills matching those of her brother’s team.

“One of the things we’re celebrating is not just their communality but their differences,” director Gary Ross (“The Hunger Games”), told a New York press conference at the end of May.

But the director and co-screenwriter added the film did not see the light of day for “three or four years” — despite its hefty budget, and three Oscar-winning actresses and the singer Rihanna among its cast.

“Isn’t it interesting that two or three years ago, this seemed like an impossibility. Like how could you possibly get this made. And it’s so great that it’s being released now when you go: well, of course!” said Cate Blanchett, who plays Debbie’s partner-in-crime Lou.

In the era of #MeToo, nothing is neutral — not even a movie which, lacking any political plot elements, looks on paper to be pure entertainment.

And even though the film was started long before the Harvey Weinstein affair, its creators and cast have nonetheless considered questions about Hollywood’s attitude toward women.

“What really matters, especially to young women, is if you get to see not just archetypal, which is productive, flat, female characters, but how distinct and complex and nuanced the possibilities are,” said screenwriter Olivia Milch.

“You can’t underestimate the power of visual representation,” added Anne Hathaway, who stars as Daphne Kluger, the wearer of that target necklace.

“To an eight-year-old girl we’re not trying to say, ‘go and have a life of crime.’ But we’re saying ‘go do what you want. And there’s space for you,'” she said.