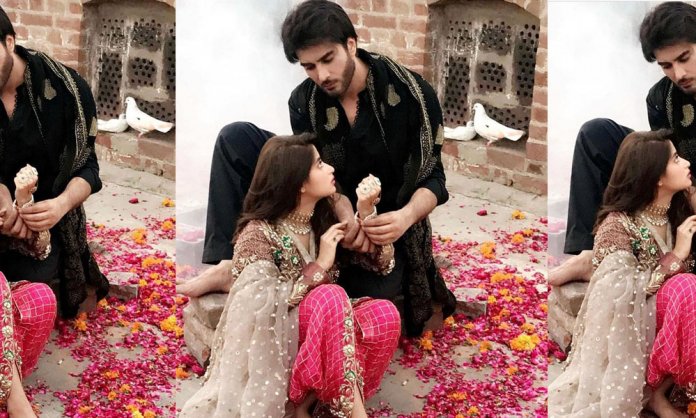 As we all know, Noor-Ul-Ain is one of the most hyped Pakistani dramas that’s yet to be aired and it’s likely to be a huge success.

It’s directed by one of the most famous directors of the Pakistani film industry, Sarmat Khoosat.

His works are considered as the finest of the industry and his previous works including Humsafar and Shehr-e-Zaat are award-winning dramas. Sarmat Khoosat is known to bring out powerful characters in his dramas and we get the feeling that this one will turn out to be a success.

Here is the OST of the drama. We really can’t wait because even the sneak peak is so beautiful!!

Here’s some more. Honestly, these teasers are something you don’t see every day.

It seems from the teasers and BTS clicks that Noor ul Ain won’t be like one of those stereotypical dramas. Instead, fans will get to see an amazing chemistry between Sajal Aly and Imran Abbas and witness their powerful acting skills.

We are eagerly waiting to witness the romantic saga of the year because this is one pairing we have been waiting for so long & thought it would never happen! @sajalAly & @ImranAbbas.official will be putting the screen on fire with the much anticipated #Noorulain that is to be aired in February on #ARY Digital @Raspberry_pr :::::::: :::::::: #an #adofashion89 #adilanoreen89

If you want to know about the story, cast, and timings to one of the most highly anticipated series of the year, then click on the link below!

Here are some of the latest glimpses of the drama’s behind the scenes you might not have seen yet.

Khizar and Noor are definitely rocking that hipster look!

Filming one of the scenes of Noor-ul-Ain!

Hiba Khan is a new actress who is making her debut with the amazing director, Sarmat Khoosat and even at the set, she couldn’t stop her hype.

We wish the cast of Noor-ul-Ain the best of luck. Can’t wait to see it!