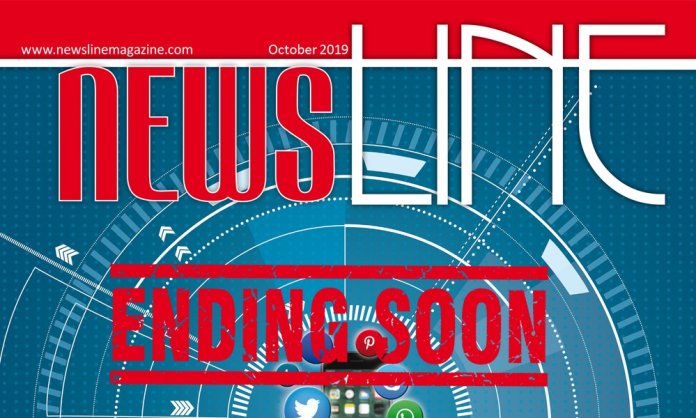 Almost completing three decades in the journalism world, the Newsline magazine known for its “independent and courageous ” journalism will be coming to an end as announced by Rehana Hakim, the Editor of the magazine.

She attributes the closure to the financial constraints of The HUM Network as it is under the ownership of the media company. The magazine’s first issue was published on July 1, 1989, led by the late Razia Bhatti and the last will be on November 30th 2019 under the editorial leadership of Rehana Hakim.

As per a HUM spokesman, the final decision is still pending, but the news has left the readers and Newlines contributors really emotional. We might read the last publication in December 2019.

Twitter start pouring in their reaction as the speculation surfaced. The users shared their affiliation with the magazine by reminiscing the old times.

Some blamed the digital age to be the reason for this decision of closure of the print magazine.

Bad News for Print Journalism in #Pakistan: Newsline Magazine will have December 2019 issue as their last one. The illustrious journey of 30 years will come to an end. #Karachi

Other just shared memorable pictures that have captured a moment they want to relive.

Sad news. Newsline is closing down. End of 30 year long journey . A memorable picture at the inaugural issue of the magazine in July 1989 pic.twitter.com/j0ElE6XP3o

Even the co-founder of the Newsline magazine expresses her grief in her latest article for a private publication.

“Legally, we no longer owned Newsline and the decision to cease publication was rightfully the owner’s, but emotionally and idealistically perhaps we will always own Newsline because it was always so much more than just a publishing project…it was always about making the dream of editorial integrity a reality. by Umber Khiari”

We did get a word from a spokesman at HUM Network Limited, and according to them:

“The decision is pending from the management and soon they will update the audience.”

We all will be waiting patiently for the final decision. Let’s hope it’s not the end of the era of true journalism.

Stay tuned for the latest updates as we will be bringing you all the current developments.