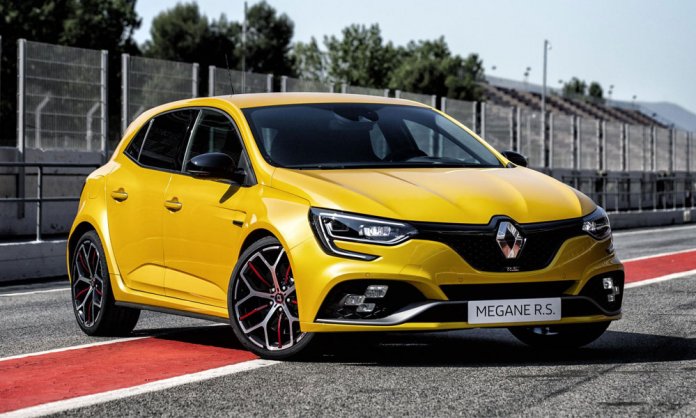 European performance car fans can look forward to the even greater performance and plenty of dynamic design thanks to a new Renault Mégane R.S.

The trophy that’s just been launched. This exciting new model will boost the Renault Sports line-up by extending the family of Trophy versions produced since the first generation of Mégane R.S. kicked things off.

This new Mégane R.S. Trophy is more than just a tuned-up version of the regular car as under the hood there’s a brand-new version of Renault’s 1.8-liter turbo engine making its debut.

This new powerplant ups the power output of the Mégane to an impressive 300 horsepower and 420 Nm of torque, and it’s the first time an R.S model has produced that kind of power.

The significant power boost is largely due to the use of pioneering technologies, especially for the turbocharger and an exhaust system capable of altering the engine note, which is also firsts for this new Mégane R.S. Trophy. Buyers have the opportunity to combine the new engine with their preferred choice between a six-speed manual or a six-speed EDC (Efficient dual-clutch) gearbox.

There are plenty of other performance upgrades to differentiate this Mégane R.S. Trophy from the standard Mégane R.S. The car is built on the Cup chassis, which boasts stiffer suspension and a Torsen mechanical limited slip differential.

The R.S. Trophy gets further enhanced with the inclusion of bi-material front brake discs, and a set of specific 19-inch ‘Jerez’ alloy wheels with high-performance Bridgestone tires. Performance can be improved a little further by pairing the tires with some new, exclusive lighter wheels to reduce the total unsprung weight of the car by 8kg.

As well as being designed to deliver a thrilling drive on the track, the new Mégane R.S. Trophy is also designed to be equally as adept for everyday use. This is ensured by the driver being able to select different driving modes using the Multi-Sense system and with features such as the advanced R.S. Vision lighting system and the R.S. Monitor telemetry and data acquisition system.

High praise for the new car comes from Nico Hülkenberg, the Renault Sports Formula One Team driver and Renault Sports ambassador. Nico says “I have been involved in the Mégane R.S. development process since last year and I’m very pleased to see an even sportier version added to the family!

Each of the new features on New Renault Mégane R.S.Trophy offers greater sports performance and feel. It’s obviously positive to have more power and better grip through the tires and to benefit from improved braking endurance. I also enjoyed the feeling offered by the new seats: the support they provide for sports driving is excellent.”

The Mégane R.S. Trophy will be available to order from the autumn, with deliveries starting in the winter.