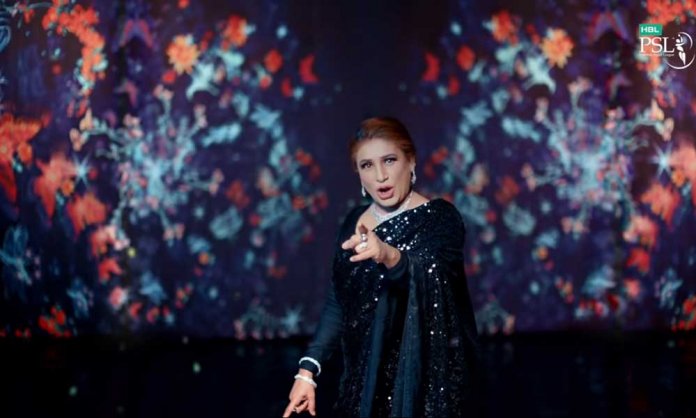 PSL Anthem for 2021 was released with quite a bang. There was much noise right after the song was aired. Some just did not like the song, while some thought that only Ali Zafar had given good PSL anthems. But what was in this year’s anthem? It had Naseebo Lal, Aima Baig, and Young Stunners coming together to form a stadium anthem that would make the crowd ‘groove’ with the music.

Yes, groove does not just mean a trench; it also means dancing to popular music. And yes, the anthem does grow on you. So when you sit down to listen, sometime later, you will be singing along just like you did with ‘Baby Shark’. But people have been making fun of the anthem. Aima, one could say, has not paid much heed to the trolls, the Young Stunners were used in many memes, Naseebo Lal, however, got the most bashing. The haters did not like her presence for a PSL song.

While there are haters, as there are for literally everything, people have also showered love for the song and the singers.

Before we continue further, take a look at the anthem for yourself.

For Naseebo Lal, this project was different from what she is used to. Singing a song focused on a sports-related activity, which is also the most awaited event for the entire country, must have been a new experience for her.

In an interview, she was asked about how she felt. Amidst tears of joy, she mentioned that it was all God’s blessing that she got the project. Never had she ever gotten anthems or PSL songs to sings, so if the organizers thought she could perform, it was all thanks to God. She also mentions that it was her talent that made people shortlist her for it because if it was not a challenging tune, she might not have gotten it.

The Groove Mera song has won the hearts of loyal music fans and the fans of PSL who are grooving with ‘Aaj dekhe ga crowd’ in the talented voice of Naseebo Lal.