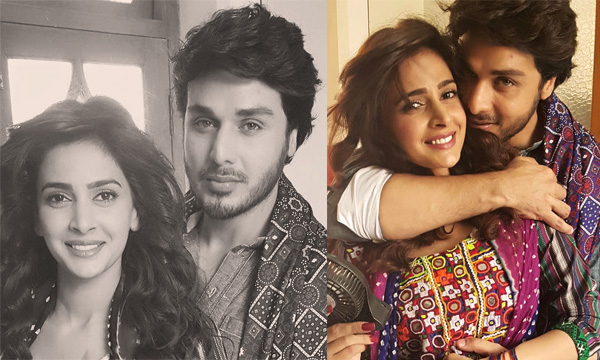 2017 was a great year for Pakistani TV and cinema as we saw some of the best dramas going on-air including Baaghi, Sammi, and Yakeen Ka Safar. The year was not only big for television but we also saw some of the biggest cinematic ventures, sweeping us off our feet with some stellar performances.

The year ended with Chupan Chupai scoring big at the box office and it wouldn’t be wrong to say that just like the previous year, this year is also going to be a good one for the entertainment industry of Pakistan.

Our favorite star Saba Qamar who stole everyone’s heart with her phenomenal performance in the hit drama serial Baaghi will be soon sharing the screen with one of the most talented and versatile actors of Pakistan, Ahsan Khan.

Ahsan and Saba will be seen as the lead in Moomal Rano, an extraordinary story of love and romance which entails passion, beauty, devotion, separation, agony, and hatred.

The Trailer of Moomal Rano has swept us off our feet! First of all, seeing Ahsan and Saba sharing the screen together after 7 years is enough to build up our excitement. Secondly, the powerful performances by the actors have already made us craving for more and we can’t wait to see the duo romancing each other on our screens.

Check out the trailer:

There’s no doubt about the fact that Saba Qamar is looking extremely gorgeous and Ahsan, as usual, is ready to surprise us with his versatility while portraying Rano.

Directed by Sirajul Haq, the story is based on the romantic tale of Moomal and Rano from Sindhi Folklore. The tragic tale appeared in Shah Abdul Latif Bhitai’s Shah Jo Risalo which also included the tales of Umar Marvi, Sohni Mehar and Sassi Punhun.

Moomal Rano was originally made for Indo-Pak project Zeal for Unity for filmmakers which was disrupted due to the tensions between India and Pakistan.

It seems like there’s no stopping for Saba and Ahsan as both of their careers have been on a roll, giving one extraordinary performance after other.

We can’t wait to see the Dastaan couple on our screens once again.