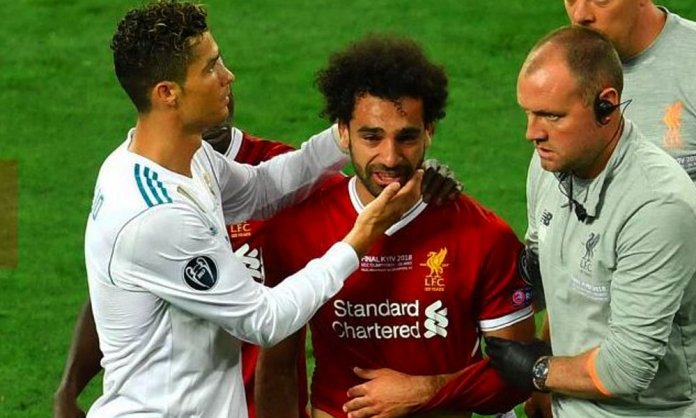 Egypt’s Mohamed Salah is “confident” of being fit for the World Cup despite suffering a shoulder injury in Liverpool’s Champions League final defeat against Real Madrid.

Salah was forced off in tears during the first half of the 3-1 loss in Kiev on Saturday, sparking fears he wouldn’t make it to next month’s World Cup.

The 25-year-old sustained the problem when he was dragged awkwardly to the turf following a challenge with Sergio Ramos, leading some to claim the Madrid defender had deliberately tried to injure Liverpool’s star forward.

Speaking after the final, Liverpool manager Jurgen Klopp had described the injury as “serious” amid fears Salah had suffered a dislocated shoulder.

That would have ruled him out of Egypt’s first appearance in the World Cup since 1990.

Salah was pictured with his shoulder in a sling when he got off Liverpool’s plane at John Lennon Airport on Sunday.

But it now appears there is a good chance Salah will be able to join his country for the tournament in Russia.

“It was a very tough night, but I’m a fighter. Despite the odds, I’m confident that I’ll be in Russia to make you all proud,” Salah wrote on his official Twitter account on Sunday.

“Your love and support will give me the strength I need.”

Egypt’s team doctor Mohamed Abou El-Ela said in a statement that, according to information from Liverpool’s medical staff, Salah has sustained only ligament damage.

And, just as Salah tweeted his fitness update, fresh reports in Egypt claimed he had only suffered a strain in the shoulder ligaments and is expected to be back in action in three weeks.

Ramos apologized after the match, but Liverpool defender Andrew Robertson hinted the Madrid captain knew what he was doing when he collided with the Egyptian.

“I think it is just how he (Salah) has landed but Ramos is quite clever, isn’t he?” Robertson said.

“It’s unfortunate. It just disrupted our rhythm a wee bit.”

Salah had been instrumental in Liverpool’s unexpected run to their Champions League final since 2007.

In an incredible first season with the Premier League club following his transfer from Roma last year, Salah broke a host of record as he scored 44 goals in all competitions.

He was voted Liverpool’s Players of the Year and also scooped the PFA and Football Writers’ Player of the Year awards.

Salah had also scored the goal that took Egypt to the World Cup when he netted a dramatic late penalty in a qualifier against Congo in October.

“He has done unbelievably this season and for it to end that way for him was devastating,” Robertson added.

“I hope he goes to the World Cup because a nation is relying on him.

The Pharaohs will then play against Russia and Saudi Arabia on June 19 and June 25.

Before that, Egypt will play friendlies, almost certainly without Salah, against Belgium and Colombia on June 1 and June 6.