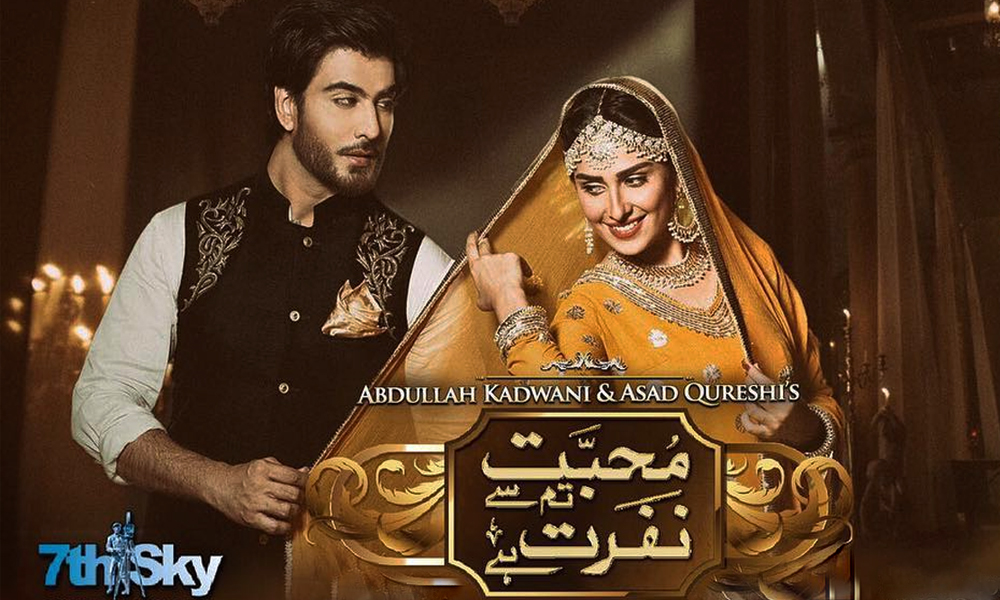 The super-hit on-screen couple, Ayeza Khan and Imran Abbas are back with a bang to rule over TV screens with their upcoming drama, Mohabbat Tumse Nafrat Hai on Geo Entertainment TV.

Shehzad Sheikh is also part of the stellar star-cast.Ayeza Khan plays the role of ‘Maheen’ while Imran Abbas will be seen playing ‘Waqar’

Ayeza Khan’s looks regal in the first promo shared by Geo TV, she certainly resembles Deepika Padukone from Bajirao Mastani (with the same minimal makeup look and jewelry). Ayeza definitely could give top B-town actresses a run for their money!

Check Out the Teasers for Mohabbat Tumse Nafrat Hai

After watching the two teasers for the drama, we can predict that the show will revolve around the love triangle between Ayeza Khan, Imran Abbas and Shehzad Sheikh. Mohabbat Tumse Nafrat Hai seems to be an intense romantic series full of emotion and melodrama.

The drama is penned by Khalil ur Rehman Qamar and directed by the brilliant Farooq Rind under the power-house 7th Sky Production house.

The timings for the drama is Saturday 8:00 p.m on Har Pal Geo.

Ayeza is currently playing the role of Shehernaz in Urdu1’s prime time TV show and is also soon going to be seen in an upcoming drama opposite Sami Khan for Hum TV. Looks like Khan is being roped in for all the best projects in the TV industry at the moment!

Are you excited to watch Ayeza Khan in a new avatar? Let us know in the comments below.