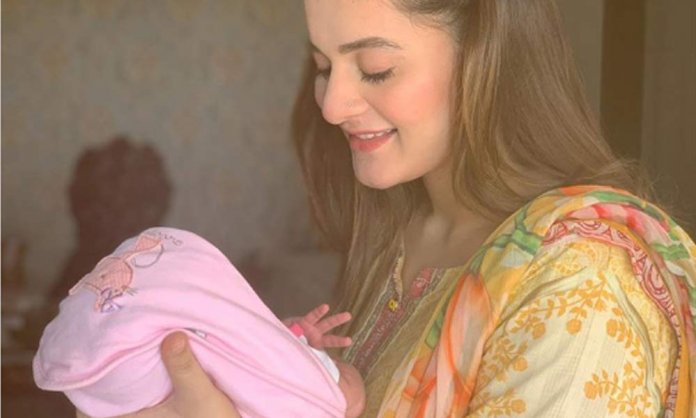 September 11, 2019: Photos of Aiman Khan and Muneeb Butt with their new born daughter Amal Khan are spreading across social media like fire in a jungle, and we aren’t really surprised

Soon after the photos went viral on the internet, Minal Khan and Aiman Khan have been requesting to delete the pictures. Surprisingly, Aiman Khan also blocked a number of pages for posting leaked pictures on their handle.

While expressing her anger, Minal Khan commented on her fan pages to delete the pictures.

Do you think her anger is justified? Let us know in the comments!

August 30, 2019: One of Pakistan’s most well-known and adored couple, Aiman Khan and Muneeb Butt have been blessed with their first bundle of joy.

Just a few days ago, we saw a few images surface from Aiman’s baby shower hinting at the gender of the baby. Now, it has been confirmed.

Both parents have welcomed their first child, a baby girl, into this world. The mother and the baby are said to be doing fine and now their fans just cannot stop pouring their love to the new parents.

The new father took it to his Instagram to announce the news of the blessing! He also announced the name of the baby girl as ‘Amal Muneeb’.

However, the duo has not shared any pictures of their little bundle of joy yet and we are eager to get a glimpse of the tiny tot.

Brandsynario gives a warm and hearty congratulations to the parents.